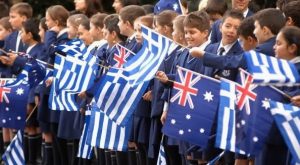 Many Greeks in recent years have decided to move to Australia. The financial crisis in Greece and the rise of unemployment has led them to migrate abroad. Australia is one of their top destinations, since it offers a large Greek community. Adding to that, the Australian government had previously published an open invitation to Greeks wishing to work in Australia in several sectors, including taxi drivers.

A study conducted by the Australian-Greek Welfare Society (AGWS) was presented a few days ago, which included several interesting facts of this new migration trend of Greeks to the country.

The study entitled “The Voyage of Young Greek Migrants to Australia: Opportunities and Challenges” was conducted by Dr. Konstantinos Tsigas and was presented at the Migrant’s Museum of Melbourne in the presence of the Federal Minister of Social Services Kevin Andrews, who made special reference to the story of Greek migration to Australia that began 160 years ago.

According to the study, more than 8,000 Greeks have arrived to the State of Victoria from 2010 until today. The majority of them (60%) are Greek-Australians who had returned to Greece with their families before 2010 and decided to move back to Australia after failing to find a better life in Greece due to the financial crisis.

Migration to Australia is a challenge for the Greek community, since they have given it a new boost. Most new migrants are well-educated and skilled. For example, the Greek speaking schools have increased the number of attending students. However, AGWS is facing a lot of problems, since they do not have enough funds to support newcomers. The study concludes that soon, all newcomers will blend with the Australian society without problem.