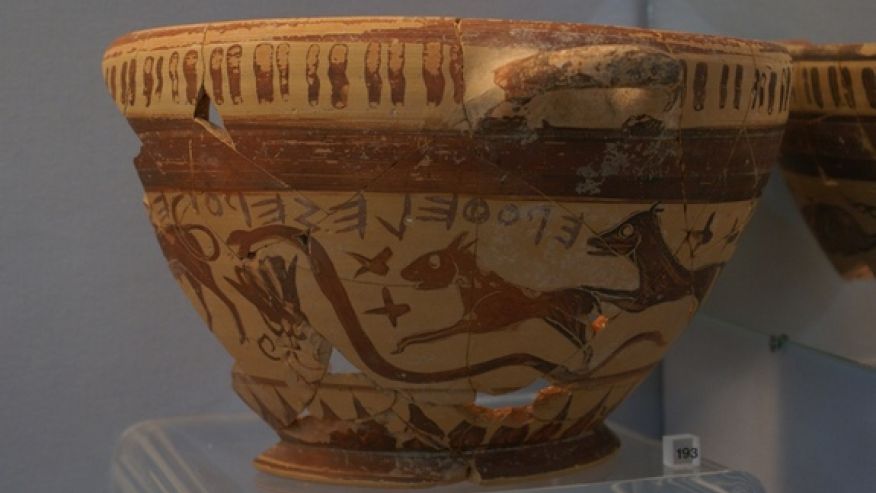 The 2,600-year-old wine cup — called “skyphos” in ancient Greek — that is on display at the Lamia Archaeological Museum in Greece is thought to depict constellations, according to a new analysis.
Until now, archaeologists believed that the drawings on the piece of ancient pottery were depicting animals. Now researcher John Barnes, a classical archaeology doctoral candidate at the University of Missouri, believes that they actually depict constellations, a Live Science article says.
Barnes suggests that the interpretation of the drawings in the particular skyphos may lead to a better understanding of how ancient Greeks viewed astronomy. It can also lead to a new reading of other similar depictions on ancient pottery.
The two-handled wine cup dating back to 625 B.C. was found near the acropolis of Halai, north of Thebes, Greece, from the same era. One handle and nearly one-third of it is missing. It has drawings of a bull, a snake, a small dog or rabbit, a large dog, a scorpion, a dolphin and the front half of a lion or panther. The grouping of the snake, the rabbit and the dog looked like constellations, Barnes said.
He also said that he found the collection of animals atypical: The dolphin is out of place with the other animals and the scorpion is an uncommon choice for such decorations. The position of the snake under the dog and rabbit is also atypical.
Barnes believes that the bull is Taurus, the rabbit is Lepus, the scorpion is Scorpius, the dolphin is Delphinus, the lion is Leo, the snake is Hydra, the dog is Canis Major or Canis Minor. He suggests that the constellations are arranged according to the four seasons they appear and not as they are lined in the sky. For example, the grouping of snake, rabbit and dog represent winter, and the dolphin, lion and a part that’s missing signify summer.
The Live Science article concludes with Barnes’ assumption that the wine cup shows a generalized representation of time throughout the year.