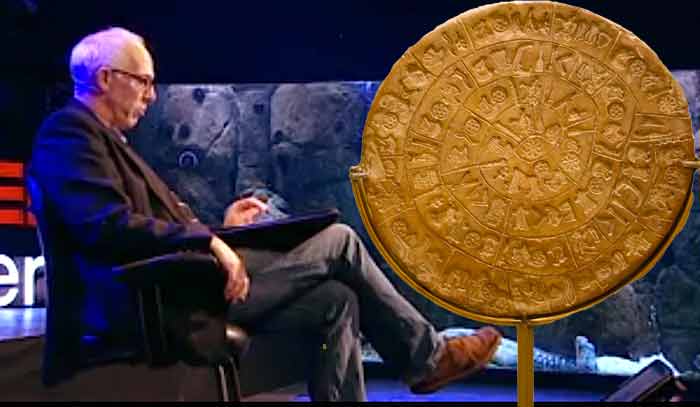 The first ever CD-ROM, the infamous and enigmatic Phaistos Disc that was made 4,000 years before the development of computer science, is believed to have been unscrambled by researchers of the Technological Education Institute of Crete, Greece.  According to Dr. Gareth Owens, the disc “stores” a prayer to a mother, Archaeology News Network reported.

Experts have been trying to read the pictoral signs for almost a century and this is the latest attempt to interpret what its 241 tokens, made up of 45 unique signs, mean. Dr. Owens believes he has identified the keywords “pregnant mother” and “lady of great importance,” and the next step is to unravel the signs’ specific meaning, as well as its ancient use.

The “first Minoan CD-ROM” was recorded using an ancient language made up of signs, including what looks like a plumed head, a child and even a beehive. The disk is thought to date to the middle Minoan Bronze Age, in the second Millennium BC, and was surfaced in 1908 at the Phaistos palace in Crete. It measures six inches (15 cm) in diameter and is covered in a spiral of stamped signs on both sides. So far, most experts believe that the inscription should be read from the outside edge of the disk, inwards.

“The most stable word and value is ‘mother,’ and in particular, the mother goddess of the Minoan era,” Dr. Owens said in a public talk at the Institute. To come up with his theory, he had to look at groupings of signs found on three of parts of one side of the disc. They spell out “I-QE-KU-RJA” and Dr. Owens said that “I-QE” means “lady of great importance.” On the other side of the double-sided disc, he identified the word “AKKA,” which, he said, means “pregnant mother.” Therefore, Dr. Owens thinks that one side is dedicated to a pregnant woman and the other to a woman giving birth.

During his speech at TED talk in May, he explained that modern CD-ROMs are used in the same way as the ancient disc, storing information. Its importance is based on the fact that it comes from Minoan Crete, the continent’s first literate civilization.