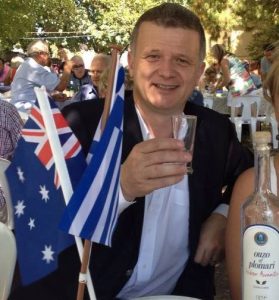 Kotsiras comes from Samaras’ hometown Pylos, in the Messini region, in the Peloponnese, Greece.

“The politician from Messini has offered a lot in his adopted country and Hellenism,” noted Samaras in his video message that was broadcast at a reception to mark the end of Nikos Kotsiras’ political career.

The reception took place at “MESA” restaurant in Victoria. 55-year-old Kotsiras was surrounded by his children, grandchildren, friends and relatives.

Among his friends was Victorian Minister for Planning Matthew Guy, who is not running for the seat that Kotsiras served for 14 consecutive years.

Born in Greece, Kotsiras arrived in Melbourne at the age of 5. He studied to be a teacher but his love for politics made him change his career.