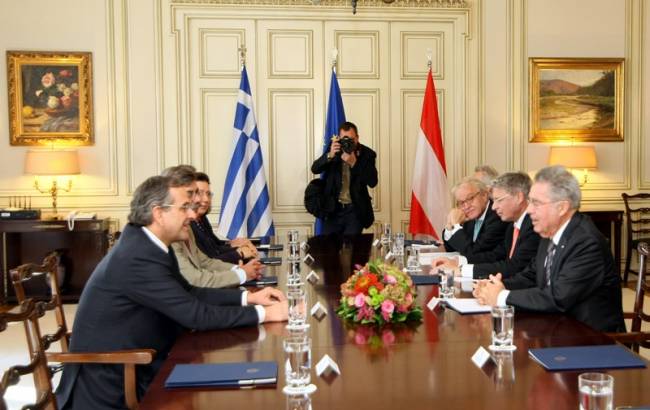 According to government sources, Samaras and Fischer discussed in good climate, mainly about economic issues, with the Greek PM briefing his guest regarding Greece’s progress in carrying out the reforms, aiming to boost the country’s economy and competitiveness. Both leaders referred to tourism, underlining the vast number of Austrian tourists choosing Greece as their holiday destination.

From his side, Fischer briefed the Greek PM on the current economic situation of his country and the Austrian government’s attempts to keep the country’s public deficit below 3% of the GDP. In addition, he expressed his satisfaction over the very good bilateral relations between Greece and Austria and appeared well-informed and satisfied with Greece’s efforts to proceed with its economic reforms. Samaras replied that Greece is now finally “taking the final steps in order to exit the crisis and emerge from the recession that tormented the country for the last six years” and noted that Greece has carried out the deepest reforms ever carried out on such a scale and short period of time. The Greek PM did not omit to refer to the sacrifices that Greek people were called to make and Fischer acknowledged that, underlining that Greece is finally on a positive course.

During their meeting, the two leaders also discussed international affairs, such as the Ukrainian crisis, the self proclaimed “Islamic State,” the Cyprus problem and the migration policy of European nations.

This was the first visit of the Austrian Federal President to Greece after a period of seven years and during his two-day stay in Athens, Fischer will also meet with his Greek counterpart Karolos Papoulias, Deputy Prime Minister and Foreign Minister Evangelos Venizelos, as well as the opposition leader, Alexis Tsipras.