Greek Universities on the Verge of Collapse

It recently took a crew of 25 municipal workers to clear the six-month-old mountains of garbage that had accumulated in the School of Philosophy of the National Kapodistrian University of Athens. If a picture is worth a thousand words, the pictures of shame published in the past few days are a fitting way to describe the state of Greek universities. These mountains of trash speak to a messy malaise in Greek higher learning.
The academic year kicked off with new deans in several Greek universities after the summer elections. Of course the word “started” cannot really describe the beginning of a Greek semester. For example, it took several days for Ioannis Golias, the new dean at the National Technical University of Athens, to be able to enter his office to perform his duties; his building was occupied by students who were protesting something or other. Last year, classes in all Athens universities started in December on account of a three-month long strike of administrative employees. The semester was lost, but few seemed to care.
One would think that the main problem Greek universities face is the lack of funding amid the crippling economic crisis. There have indeed been major cuts in education spending since 2010. But then again, that cannot justify the fact that Greek institutions of higher learning tend to operate only when permitted by their students – that is to say, those few instances when Greek students don’t find a reason to occupy university buildings.
The new dean of the National Kapodistrian University of Athens Theodoros Fortsakis said that “the university cannot operate since it has no security, no administrative staff, no funds and it is in a constant state of unrest.” The dean went to say that at least 500,000 euros worth of equipment was stolen. That is a step forward for the new dean; the previous dean never used the word “stolen” in his reports, preferring the word “missing.” Now Mr. Fortsakis is pushing for hiring security staff and taking security measures, something that has unleashed a storm of protest from students.
The dean suggested that entrances to university buildings should be guarded and that security patrols should operate throughout the night hours. He also proposed the installation of alarm systems at key security points. The students quickly labeled him a fascist, held two protest rallies in five days in front of the main University of Athens building, and clashed with riot police. 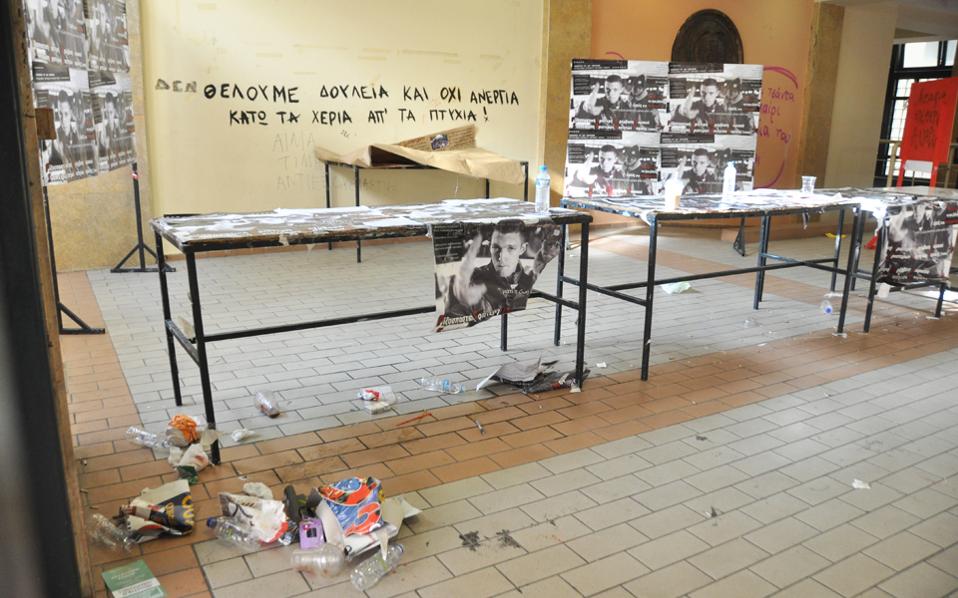 So far, many older university buildings are a free-for-all. In some of them, anyone can walk into the buildings, put up posters, steal, or vandalise. At the Athens School of Law, graffiti and posters are everywhere, desks are vandalised, glass windows broken. Unfortunately, most of the trash and damage comes from students themselves. There are few indications that Greece’s future lawyers will graduate from there; it often seems a miracle that they do. For example, the National Technical University of Athens ranks 114th in the world. You can imagine what a place it would be if conditions were better.
Still, a sizable part of the Greek student body believes that university buildings should be like that: Wide-open to anyone who wishes to go in and do whatever they want. They also believe that any attempt to protect this public property is “fascist.” They have the notion that, since they are students, the buildings belong to them.
Another major problem is that universities are used by political parties for member recruitment. It is an excellent breeding ground for votes; students are young, innocent, restless minds with a thirst to make a change. The pressure to belong to a political group when you are a student is so strong that you are considered an outcast if you refuse to join. Many of the “eternal” students in Greek universities are there just for purposes of propagandizing and recruiting. What is more, professors who belong to certain parties will only pass students with similar political beliefs. Greece’s notoriously corrupt upper echelons don’t just operate in parliament.
Recently, the education ministry tried to put a stop to the problem of “eternal” students – those who are registered for years and show no desire to graduate. There are 180,000 of them. It’s unclear what exactly do they do, apart from being a burden to state budgets.
It seems, then, that the plight of Greek universities is not lack of funding. In the past, vast sums of money have been poured into public higher education with no results. Students always find reasons to rally, vandalize and occupy university buildings. Measures proposed for proper, uninterrupted functioning of universities are deemed a violation of student rights. Destruction of public property is justified when students believe they are right. Learning takes the back seat. The main problem thus lies in the mentality of most Greek students: They think only in terms of rights, not obligations.