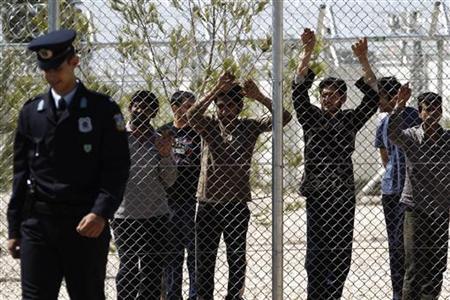 Several prisoners and police officers in Greece have been found infected with tuberculosis.
The Greek Center of Disease Control and Prevention (KEELPNO) has stated that it is launching a program to vaccinate convicted prisoners, immigrants held in detention and police officers.
Yesterday, it was reported that a Pakistani immigrant being held in the Amygdaleza detention facility had been diagnosed with the disease. The man was transferred to the Sismanoglio hospital in Athens where doctors ascertained that he is suffering from lymphatic tuberculosis, which is not contagious.
However, the fact is that conditions both in prisons and police holding cells across the country are very poor and highly conducive to the spread of diseases such as tuberculosis.
Only several days ago, two people being held in an Athens police station, were found to be suffering from tuberculosis while another six prisoners and eight police officers have been infected by the bacteria. They will be given a precautionary 9 month course of antibiotics.
While tuberculosis can be treated with antibiotics, it is one of the most difficult bacterial infections to treat, with several strains having developed resistance to multiple antibiotics.
A KEELPNO team has begun testing all the immigrants detained in Amygdaleza for tuberculosis infection, as well as the officers working at the facility and they will all be vaccinated against the disease.
Currently, 1600 immigrants and asylum seekers are being held in the facility, which is manned by 450 police officers. The facility has repeatedly come under serious criticism both due to the indefinite nature of the detention of irregular immigrants, as well as the squalid conditions they are held in.
It is very likely that the vaccination program will be expanded to all of the country’s prison facilities and holding areas in police stations where prisoners are often kept for months at a time.
Yet, while vaccinations are an important first step, the fact remains that many detention facilities throughout the country remain overcrowded and with grossly insufficient sanitation.
The country was heavily criticized recently by the European Council for the Prevention of Torture and Inhumane Treatment. The Council catalogued a number of cases of gross inadequacy and stated that the country has the greatest prison overcrowding problem in Europe.
According to the Greek Justice Minister himself, the prison population is 40% over capacity, with 13,000 detainees crammed into facilities that are only designed to accommodate 9,000.