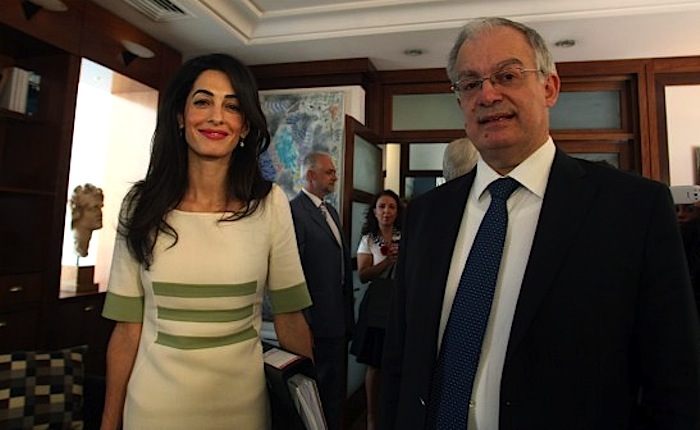 Following her meeting with Culture Minister Kostas Tasoulas, famous human rights lawyer Amal Alamuddin-Clooney visited Varoulko restaurant at the Mikrolimano seafront in Piraeus, to taste amazing dishes prepared by top Greek chef Lefteris Lazarou.
Alamuddin and two other British lawyers arrived yesterday in Greece to provide the Greek government with legal advice on its efforts for the return of the Parthenon Marbles.
Geoffrey Robertson and Norman Palmer, both lawyers with extensive experience in cases of cultural restitution, are the delegation’s senior lawyers, although Alamuddin-Clooney has unsurprisingly drawn rather more attention. Also taking part in the meetings is David Hill, President of the International Committee for the Reunification of the Parthenon Marbles, who was already in Greece.
During the meeting, Tasoulas reiterated the Greek government’s desire for a process mediated by UNESCO (i.e. outside of international courts). That proposal was made over 15 months ago although there has been no official response from Britain, a fact which prompted UNESCO to reprimand the country in a recent Paris meeting by the organization’s committee for cultural restitution. Britain has six months to accept the (non-binding) process.
Another option is to seek a legal route, although some believe this may be risky given that there is no guarantee that such a case would be successful, and a negative result would be catastrophic for those wishing to see the marbles returned to Greece. Specifically Professor Dusan Sidjanski, President of the Swiss Committee for the Return of the Parthenon Marbles, sent an urgent letter to Greek Prime Minister Antonis Samaras urging the Greek government to use Alamuddin as a ‘consultant not a lawyer’.
The UK lawyers are expected to make recommendations of their own, although it is unclear if any statements will be made following today’s meeting.
Alamuddin and the other lawyers, along with cultural restitution experts, will meet with Samaras tomorrow at 11.30 am for approximately one hour. Tasoulas and Deputy Prime Minister Evangelos Venizelos may also be present.
Subsequently, the delegation will be given a tour of the new Acropolis Museum after which a press conference will be held at 1.30 pm. Alamuddin may also visit the Parthenon.
The spouse of the formerly most desirable bachelor on earth has reportedly already enjoyed her first views of the Acropolis, having dined at the roof garden of the Grande Bretagne hotel last night, which is over-looked by the ‘sacred rock.’

Americans have been a major part of summer tourism in Greece. Although they may not make up the largest contingent of visitors, they spend more.
Greece