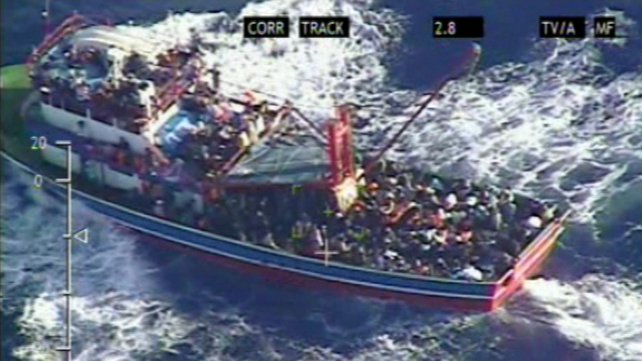 A cruise liner returning from Greece has rescued approximately 300 Syrian refugees whose trawler had run into trouble at the sea area off Paphos, Cyprus.
The cruise liner had been en route from the Greek island of Syros to Limassol when it received a call to assist in the rescue operation.
The trawler sent out a distress signal at 6:25 am local time when it was about 50 miles southwest of the tourist hub of Paphos, the Cypriot government said.
The refugees, mostly women and children, were loaded aboard the Salamis Filoxenia cruise liner and were in “good health,” according to Limassol port master Giorgos Pouros.
The vessel is expected to dock in Limassol this evening.
Aerial photographs released by the Ministry showed a large fishing trawler overloaded with people in heavy seas.
Director of Limassol General Hospital Chrysostomos Andronikou said medical teams would be at the port to receive the migrants and hospitalize anyone needing treatment.
“On board the ship are about 300 people that require recovery and rescue because of bad weather conditions in the area,” the Defense Ministry said after the operation was launched.
The Interior Ministry said the migrants would be bused to the Pournara army camp in the small town of Kokkinotrimithia, about 10 kilometres (six miles) west of the capital Nicosia.