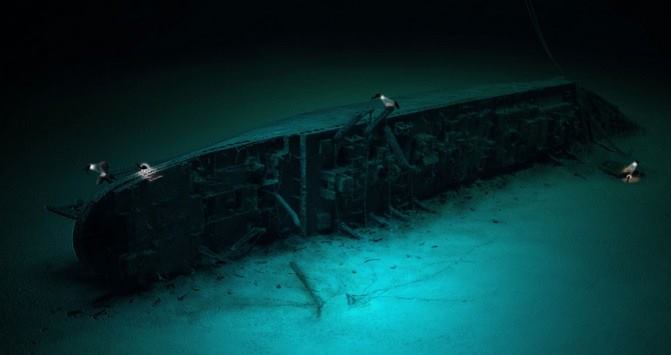 So fascinating did the mystery of the Britannic shipwreck prove to Jacques Cousteau, he scoured the depths of the Kea coast in the hopes of finding it. Sister ship of the Titanic, the Britannic ocean liner was christened during World War I by the British Navy. At the War’s height, the Britannic was converted into a hospital ship. It sunk in 1916 after hitting a German mine somewhere off the coast of Attica.
Decades later, the Greek Department of Underwater Antiquities, helmed by architect-engineer Katerina Tagonidou, has employed special technology in order to further analyze the Britannic wreck and attain underwater footage of the ship’s remains.
Earlier this month, diving expeditions headed to the waters off Kea. The project lasted approximately 10 days. The Greek teams used state-of-the-art submarines and ROV (Remotely Operated Underwater Vehicle), which were transported by the Maltan “U-BOAT NAVIGATOR” ship.
Tagonidou and the Department of Underwater Antiquities aim to use photographic footage captured by the diving expeditions to verify the condition of the Britannic, which currently rests in 120 meter-deep water. The mission is projected to spark public interest in Greece’s marine monuments.
The Britannic’s death toll was not large. Of 1,300 passengers, just 30 sank with the ship. The ship’s final resting place remained a mystery until 1975, when Cousteau announced his discovery of the Britannic to worldwide fanfare. In 1990, Simon Mills bought the wreck. He has subsequently written two books about it and appeared in many television documentaries about the Britannic.
(Artwork by William Barney 2©13)