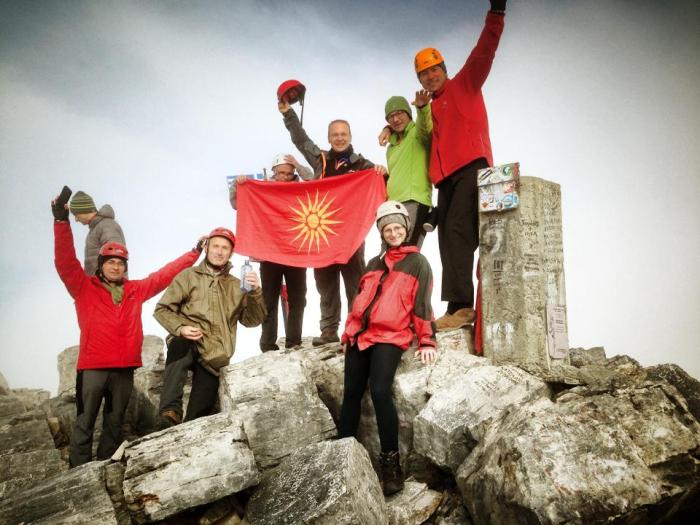 FYROM’s Parliament Vice-President Antonio Milososki tweeted a picture of him and a group of climbers on Sunday, holding a flag with the Vergina Sun symbol after reaching the highest peak of Mount Olympus.
Between 1991 and 1995 FYROM used the Vergina Sun on its national flag. It is a symbol that was found on the tomb of Philip II, King of Macedon, at the archaeological site of Vergina in northern Greece. In 1995, the country agreed to stop doing so after signing an Interim Accord with Greece.
“Upon entry into force of this Interim Accord, the Party of the Second Part shall cease to use in any way the symbol in all its forms displayed on its national flag prior to such entry into force,” states the agreement’s Paragraph 2 of Article 7.
Milososki, however, stated in an interview with FYROM newspaper “Vest” that the Vergina Sun is a “historic Macedonian symbol.”
“I always carried the flag with the 16-pointed Macedonian sun with me,” he added. “Another member of the climbing group had the state flag with them. So we raised both flags at the peak of Mount Olympus and we took photographs with great satisfaction.”
Meanwhile, the Greek government spoke of provocation regarding Milososki’s recent actions. The Vergina Sun has been considered a national Greek symbol since 1993. “We thank Mr Milososki for visiting our country so he could be photographed in Greece, with a Greek national symbol,” said Foreign Ministry spokesman Konstantinos Koutras.
“We would not encourage him to do the same in his country as this would result in yet another breach of the Interim Accord and the Memorandum on Practical Measures. Provocations may justify Greek positions against all forms of irredentism but they do not help anyone, certainly not FYROM and its people.”