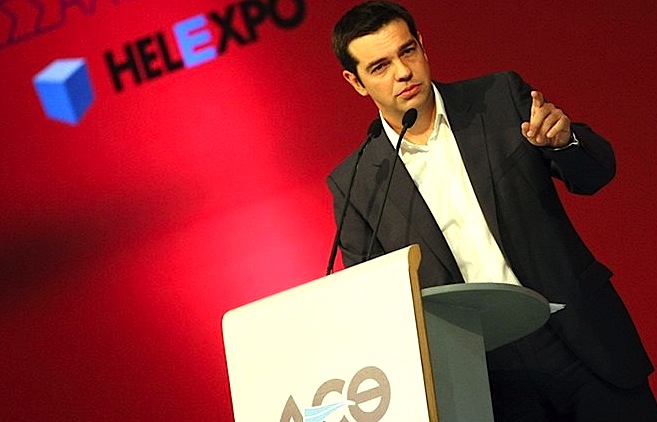 SYRIZA party leader Alexis Tsipras, speaking during the Thessaloniki International Fair (TIF) on Saturday, referred to his party’s economic policy and called for general elections immediately.
Tsipras attacked the coalition government and accused Antonis Samaras and Evangelos Venizelos of obeying the demands of the Troika of Greece ‘s international lenders and German chancellor Angela Merkel.
Tsipras stated that SYRIZA would demand a major public debt write-off so that it becomes sustainable. He also pointed out the need for an international debt conference, similar to the one held in 1953 to deal with Germany’s debt.
The SYRIZA leader presented a “National Reconstruction Plan” that would replace the current memorandum and would be based on four pillars: end of the humanitarian crisis, recovery of the Greek economy, revival of the employment market and reform of the political system.
Regarding taxes,  he said that SYRIZA would repeal the unjust ENFIA tax and raise the tax-free limit to 12,000 euros, increase minimum wage to 751 euros and restore pensions and public employee salaries.
Tsipras also presented a plan for the formation of a two-year 5-billion-euro package, financed by the European Union, to boost job creation. He also claimed SYRIZA would put 20 billion euros, out of the current 68 billion, in tax arrears in a seven-year payment plan, bringing 3 billion euros to the Greek state in the first year.
He finally called for early elections as he claimed that would be beneficial for Greek society. He pointed out that he is not calling for elections because he is in a hurry to govern but because he wants to form a strong government that will fight for the interests of Greeks.