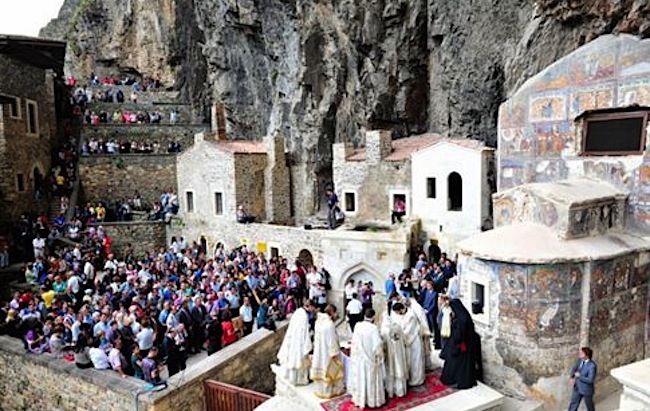 Ecumenical Patriarch Bartholomew visited Sumela Monastery in Turkey for the fifth consecutive year and officiated the Divine Liturgy held in the historic monastery.

Hundreds of worshipers attended the liturgy for the Dormition of Virgin Mary in an atmosphere of piety and emotion.

People arrived in Trabzon by air, car or even bikes in order to attend the Patriarchal Divine Liturgy at the Panagia Sumela Monastery on Mount Mela.

The Ecumenical Patriarch did not fail to mention the difficulties faced by both the clergy and people in order to perform the liturgy in the historical monastery.

During the service, Bartholomew said: “From this holy place, we are addressing the political parties and especially the religious leaders. Let us not maul our world and this region. Let’s know each other better and love each other. Let us sacrifice and compromise. Young people, families, mothers and fathers should not suffer or cry anymore.”

In the service, which was attended by 500 people, carols were sung and prayers read. Following the service, Bartholomew delivered two speeches, in Greek and in Turkish, and thanked the people of the Black Sea region for welcoming the service.

Bartholomew said: “This rare summit unites the prayers of Turks, Greeks, Russians, Ukrainians, Poles, Georgians and millions of Orthodox people. The ancestors of our church went through difficult times to preserve their belief. Today, hundreds of thousands of Christians experience similar conditions. The escalating religious and sectarian strife in the Middle East and Africa is now threatening humanity. Though able to find solutions to economic problems, humans fail in the fields of religion and belief.”

In June 2010, Turkey gave permission to the Ecumenical Patriarchate to officiate a Divine Liturgy for the Dormition of Virgin Mary, on August 15, in the historic Monastery of Panagia Sumela.