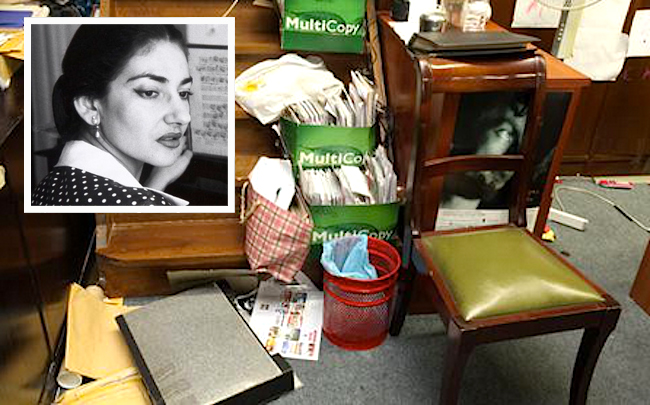 The doors of the Theater Museum in Athens — which hosts personal items of Maria Callas and memorabilia of her shows — are closed while the abandoned building is about to collapse.
The museum hosts exhibit areas designed as dressing rooms that include personal items and memorabilia of theatrical perormances of leading Greek actors such as Melina Mercouri, Dimitris Horn and Aliki Vougiouklaki.
Cockroaches, rodents, termites, moisture and inappropriate ventilation threaten the exhibits. The situation in the Greek opera diva’s dressing room is tragic. A large termite nest is hanging while flies and gnats are all over the room.
The Theater Museum, housed in the basement of the old mortuary of Athens, is literally collapsing. The computers do not work, the phone lines are cut and the databases are not active.
The exhibits of the museum are in serious danger as no conservation or renovation work has been done in decades.
The museum is unique in its kind not only in Greece but also in the Balkan region. It was founded in 1938 by the Society of Greek Playwrights. After the dictatorship it was housed in the Cultural Center of the Municipality of Athens.
The exhibits include memorabilia of theatrical life, stage costumes and props, photographs, models of stage settings and personal belongings of leading figures of the Greek theater. The library includes about 25,000 volumes on theater, from Greek and foreign bibliography. The theatrical archives include 18th century manuscripts, programs and posters of theater companies from the 19th century on.