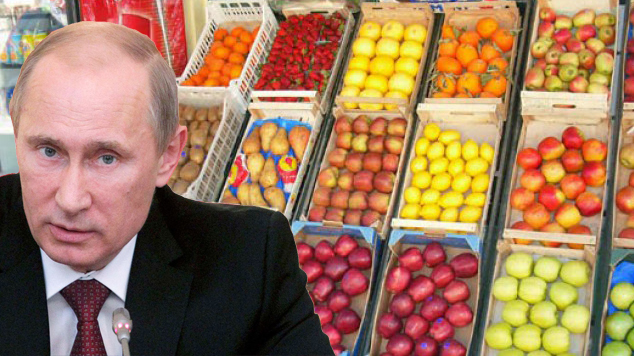 Baby food and alcoholic drinks, including wine, have been excluded from the embargo the Russian government decided to impose on imports from EU countries, the United States, Australia, Canada and Norway. Although the ban on Greek goods exported to Russia does not apply to olive oil, it includes olives.
Russian Prime Minister Dmitry Medvedev announced that “Russia is imposing a full ban on imports of beef, pork, fruit and vegetables, poultry, fish, cheeses, milk and dairy products.”
He clarified that the measures taken is a response to the sanctions imposed by US and Europe adding that “We did not wish for such a development. There is nothing positive regarding the sanctions.”
European Commission expressed its discontent regarding the Russian embargo on European products.
“This announcement is clearly politically motivated. The Commission will assess the measures in question as soon as we have more information as to their full content and extent.”
Foreign Ministry to set up working group for Greek exports to Russia
The Greek Foreign Ministry immediately announced the establishment of a working group to monitor the Greek exports to Russia, and the coordination of all pertinent actions. The working group, which will consist of ministerial officials, as well as sectoral company representatives, will also be exploring any expansion prospects to new markets for Greek export goods.
The decision for the establishment of the working group was announced on Thursday, at a Foreign Ministry meeting following the Russian President Vladimir Putin’s announcement of retaliatory measures against a series of sanctions imposed on Russia by the EU after the Ukrainian crisis.
Apart from ministerial dignitaries, representatives from the Hellenic Federation of Enterprises (SEV), the Federation of Industries of Northern Greece (SVVE), the Panhellenic Exporters Association (PSE), the Athens Chamber of Commerce and Industry (EVEA) and many more regional and professional associations, federations and chambers from all over Greece, attended the meeting.
Today the Greek foreign minister and former PM said that “we are in continuous deliberations in order to have the smallest possible consequences, and if possible no significant impact whatsoever.”
They added that “Greece is trying to protect agricultural production, keep friendly relations with all countries, and fulfill its EU obligations.”
However, Greece can’t satisfy everyone. Certainly not its food exporters if it wants to remain on friendly terms with the union that has kept it on life support for the past 4+ years.
Ministry officials as well as export and industry representatives expressed cautious optimism over Greece ’s exports to Russia.