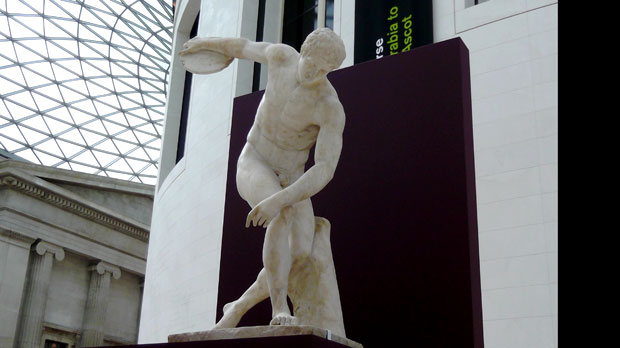 The discus thrower, or Discobolus, is one of the most famous ancient Greek statues. Its photograph has been included in hundreds of books and most importantly it was used to promote the 1948 Olympic Games in London.

The Roman replica of Discobolus was unveiled in Bendigo, Victoria’s third largest city, in the Bendigo Art Gallery, as part of the British Museum’s exhibition, called “The Body Beautiful in Ancient Greece,” which consists of 100 works of art and has toured internationally in recent years.

“You will discover the Discobolus at the end of the exhibition after being taken on an explorative journey highlighting the beauty of the male and female body, sex and desire, the super athlete, the Greek gods, youth and old age, and the unique characteristics of the human face,” said Karen Quinlan, Bendigo Art Gallery director.

According to Dr Ian Jenkings, curator of Greek and Roman art at the British Museum, the Discobolus “is quintessentially an eternally youthful image of an athlete perceived to be … an embodiment of truth and beauty in Greek ethics.”

The exhibition aims to touch on various modern-day issues such as sexuality, nudity, underage sex, body image and the essence of human nature.