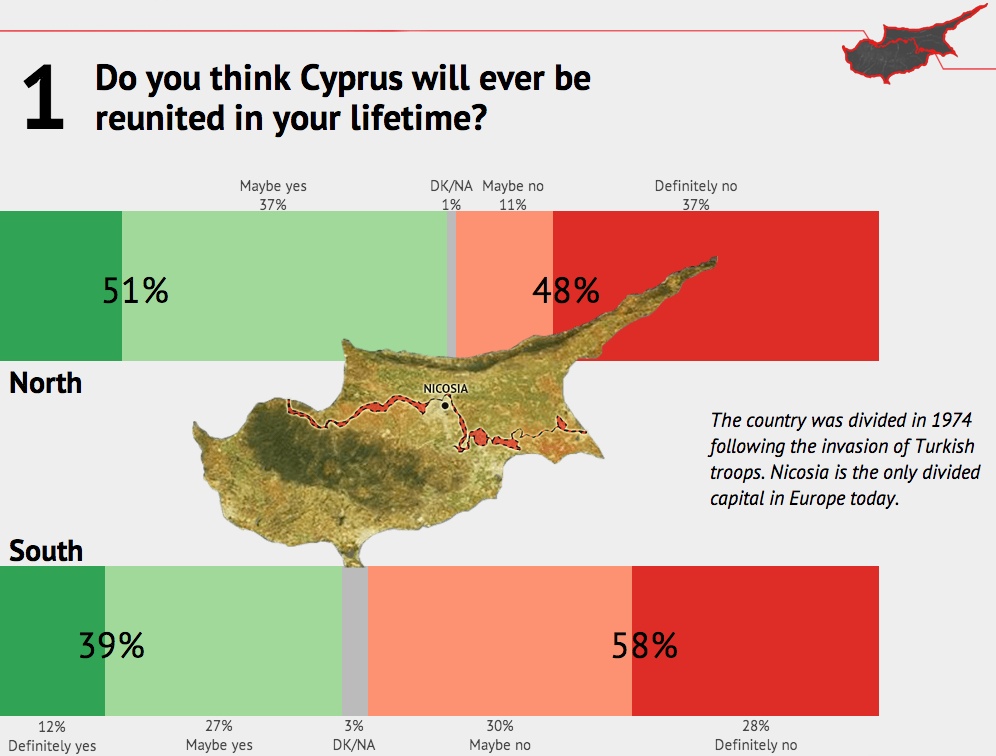 – 58% of Greek Cypriots say Cyprus will not be united in their lifetime
– Only 51 % of Turkish Cypriots are hopeful of a united Cyprus
– Both sides overwhelmingly agree latest peace talks will fail
As part of Al Jazeera English’s special focus on the divided island of Cyprus, a new poll on the Turkish and Greek Cypriot communities has been commissioned on how they view the future of their island.
When asked if both sides think Cyprus will be reunited in their lifetime, 58% Greek Cypriots said no while 51% of Turkish Cypriots said yes. Amongst the younger generation aged 18-30, 63% of Greeks said no while 60% of Turks said yes.
When questioned about the latest peace talks between the two sides there was not much optimism as 74% of Greeks said the talks would fail while 60% of Turks also agreed.
In terms of how any future outcome would make them feel with the creation of a Cyprus based on two federal states, something the Turkish community has long argued for, 75% of Turks said they would be happy with that but 64% of Greeks disagreed as full reunification of the island is traditionally what the Greek Cypriots have demanded.
However 80 % of Greek Cypriots say they still support the idea of a UN peace keeping force in the country reflecting their long held fears about further Turkish military action, but only 52% of Turks want the UN forces to remain.
The discovery of deposits of natural gas of the coast of Cyprus has caused excitement on both sides. When asked if the discovery might help solve the Cyprus problem 59% of Greeks said it would, 50% of Turks agreed.
Al Jazeera English carried out the survey in Cyprus due to the forty year anniversary when Turkish troops invaded the northern predominantly Turkish part of Cyprus as part of the ongoing conflict on the Mediterranean island.
The poll was conducted among a representative sample in each community in July 2014. The survey on Greek Cypriots was carried out by Pulse Market Research with a sample of 503 interviews conducted with computer aided telephone interviews. The survey on the Turkish Cypriots was conducted by Kadem, with a sample of 502 interviews carried out through face to face questions.
See the graphic below as it was presented by Al Jazeera: