Anastasiades: Division Must Not Become Permanent 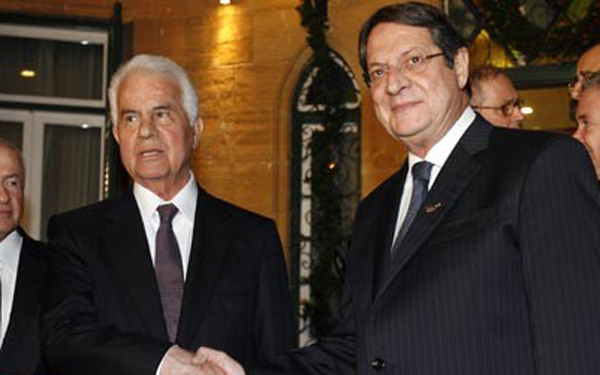 Cyprus’ current division must not be allowed to become permanent, President Nicos Anastasiades said, ahead of the 40th anniversary of the Turkish invasion. He also said that the tragedy of the invasion must not be allowed to run full circle.
In a statement to Cyprus News Agency, Anastasiades expressed the belief that current conditions allow a win-win solution of the Cyprus problem, provided the Turkish Cypriot side and Turkey understand this.
He noted that a solution that will safeguard the rights of Greek Cypriots, without denying the rights of Turkish Cypriots, was feasible. And a solution would have political, social, and financial benefits.
“With the Cyprus problem solved, there will be more opportunities to exploit the hydrocarbon reserves in the Eastern Mediterranean and create conditions of reconciliation between Greece and Turkey,” he said.
“At the same time the solution will help consolidate a sentiment of stability and bring significant investments to the benefit of all legal inhabitants of the country.”
Anastasiades added that the future of Cyprus and its children would be brighter and more hopeful if we overcome these obstacles and abolish the dividing lines through a federal Cyprus, in which the EU acquis communautaire would be applicable from Paphos to Karpasia and from Limassol to Kyrenia.
Describing the invasion as a tragic event, the president said “the expulsion of the Greek population from the occupied part of Cyprus, the settlement of all Turkish Cypriots in the northern part of Cyprus and the organized colonization of the occupied areas by Turkey, have created a new reality on the ground.”
He warned of the risk of “this temporary” state of affairs turning permanent. “What I am concerned and anxious about is not to allow the permanent division of Cyprus. My message on the occasion of this anniversary is that we have to prevent this tragedy to complete its course.”
Cyprus, he added, has a regional role to play which is much greater than its size, once its political problem is resolved. “The geopolitical balance in the region is being redesigned,” he said. “Cyprus is the only country in our region that can become the best example of coexistence of Christians and Muslims, that will maintain excellent relations with Israel and with all Arab countries.”
The solution, he pointed out, “will bring many benefits and I see no reason why we shall not be able to achieve this. “My wish and my hope is that the other side will understand the dynamics of this period to that we will be celebrating the anniversary of the solution and not the sad anniversary of the tragedy of 1974,” he said.
(source: CNA, cyprus-mail)