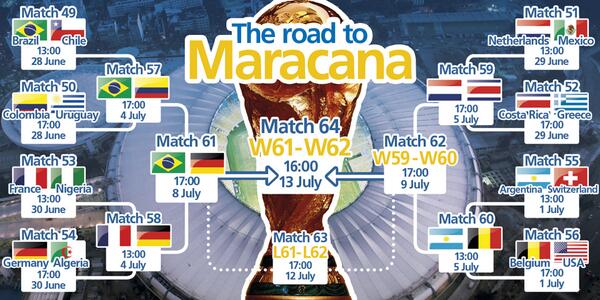 The time for the much anticipated 2014 FIFA World Cup Final has arrived. Germany will face Argentina on July 13th at 4pm EST in the Maracana stadium in Rio de Janeiro, in a repeat of the 1986 and 1990 finals.
ARGENTINA vs Netherlands
In a scoreless regulation and extra time with a horrible display of football, it was a keeper that stepped up. In this case it was Argentina’s Romero who might have been a substitute in AS Monaco’s squad this last season, but he was not rusty for sure. Saving Snjeidjer’s and Vaar’s shots, Romero didn’t only receive the MVP trophy but also led his team to the final.
GERMANY vs Brazil
With an exquisite display of some of the finest football we’ve ever come across, Germany might have started a civil war in what is described the biggest tragedy in Brazil’s history. Guided by a defense that was considered the best the Selecao had ever brought forth, the Brazilians looked to add another star on their jersey, but in antithesis they left with the most humiliating result in semifinal history. 7-1 is a result that we usually come across in south east Asian cup games, not between the most successful teams of the World Cup. MVP Toni Kroos and Andre Schurrle added two each, while Sami Khedira, Thomas Müller and Miroslav Klose put the score up to seven. Oscar scored a consolation goal in the final minutes of stoppage time to bring the score to 7-1 and salvage a small bit of respect.
Germany will look for their fourth World Cup trophy, after the ones in 1954, 1974 and 1990 against Argentina who won it in 1978 and 1986. Brazil will now have to face Holland in the game to determine 3rd place in a much anticipated reaction from the home supporting crowd who’s been let down by their darling sweetheart.
THE FINAL, July 13th 4pm EST
Germany vs Argentina @ Estadio Maracana, Rio De Janeiro
THE 3RD PLACE PLAYOFF GAME, July 13th 4pm EST