Game of Thrones Can Turn Meteora into Tourist Destination 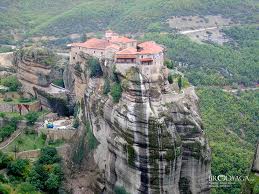 Tyrion Lannister, the midget in “Game of Thrones” is at the edge of a cliff, at the highest niche of the Castle of Vale. Behind him we can see the imposing rocks of Meteora, one of the largest and most important complexes of orthodox monasteries built on natural sandstone rock pillars in Thessaly, Greece.

Although many scenes from the first season of “Game of Thrones” were filmed in northern Ireland, the background is purely Greek. The producers of the phenomenal series used photographs of Meteora to create the scenery.

That is why, according to Huffington Post, Meteora could become a place of pilgrimage, not only for the Christians, but also for “Game of Thrones” fans.

“The site is mostly undiscovered by tourists, according to Atlas Obsura but that could change. Meteora’s role in Game of Thrones as “the Eyrie” might just turn it into a destination for fans making a pilgrimage to the show’s filming locations,” says the article.

Meteora was also featured in the James Bond film, “For Your Eyes Only.” “It’s not hard to see why the rocky pinnacles of Meteora have been featured in fantastical works…this place looks truly magical,” says the article.

Meteora is included in the UNESCO World Heritage List. It is the home of six orthodox monasteries which stand at more than 1,300 feet high and seem to be “suspended in the air.”