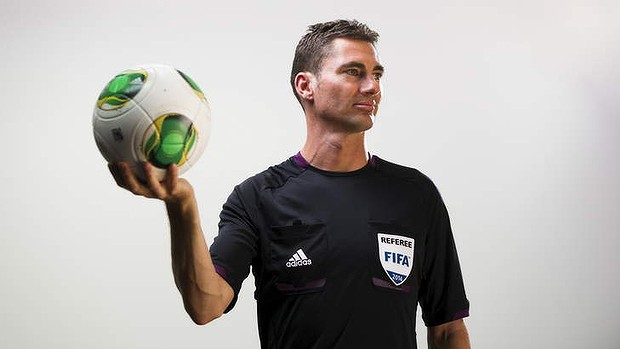 Benjamin Williams, the 37-year-old Australian referee, will take control over the match between Greece and Costa Rica today. Matthew Cream and Jan Anaz, both from Australia as well, will be assistant referees.
It will be the third World Cup match for Ben Williams, following Honduras-Ecuador and Korea Republic-Belgium. Williams has previously been selected for the Men’s Olympic Football Tournament in 2012 and the FIFA U-20 World Cup in 2013. He has overseen two Champions League finals in two different confederations, namely Waitakere United-Kossa FC in the OFC in 2007 and Ulsan-Al Ahli in the AFC in 2012. Williams debuted in the Australian League in August 26, 2005 and is now the most experienced referee in the A-League, refereeing his 100th match, Central Coast Mariners vs Adelaide United at Bluetongue Stadium in March 2012.
The game Between Greece and Costa Rica will kick off at 4 pm EST (11 pm Greek time). The winner will advance to the last 8 of the World Cup. Once again, GreekReporter will be live blogging.
Watch the game’s liveblog below or watch live here.