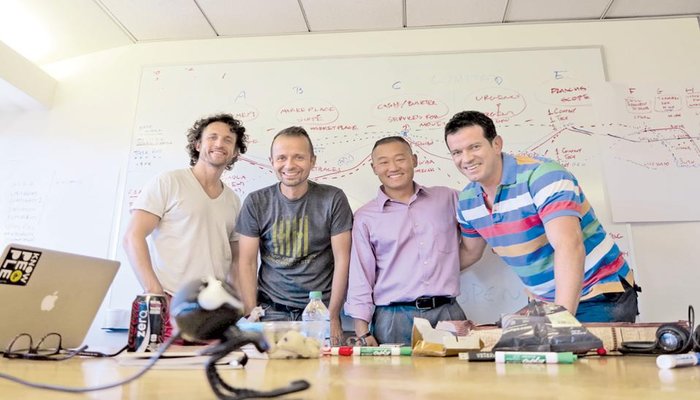 Thanos Papadimitriou (photo: first from the right) is a prominent Greek entrepreneur and business professor who decided to return to and work in Greece after an impressive and coveted career abroad.

In his interview to the Greek newspaper “Kathimerini” Papadimitriou said that he is very interested in the Greek business industry and since his return he actively supports all Greek entrepreneurship efforts and start-up businesses. He is a little concerned however, about the soaring increase of Greek start-ups.

From a very early age Papadimitriou was interested in computers and he decided to study computer science abroad. At the age of 17 and in cooperation with his mathematics professor and school director Spyros Kalomitsines, he wrote a computer manual which led to a scholarship at the renowned MIT university in the U.S. He also attended UCLA university, where he earned a master and a doctorate degree.

After finishing his studies, Papadimitriou had a thriving career abroad. He worked in Cambridge Technology Partners, a technology consulting company, and then in Silicon Valley, the U.S. technological hub. The following four years Papadimitriou worked there on several projects in ten different technological sectors. He also met and cooperated with leading professionals and experts in computer science and technology in general.

In 2012 Papadimitriou decided to sell his California-based market research company AlphaDetail and return to Greece. In Greece he came up with the idea of giaola.gr, an online platform where people can find and hire all kind of workers, such as plumbers, builders and carpenters.

At the same time, Papadimitriou along with five more technological experts from Greece and the U.S. founded mBriyo, an incubator for technological start-ups, which has supported and promoted several Greek start-ups so far.