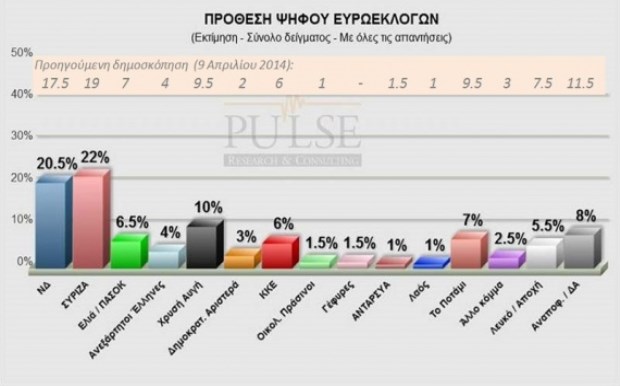 A new poll on May’s Euro elections conducted by Pulse RC for the Greek website www.topontiki.gr showed SYRIZA has retained its 1.5% lead over New Democracy, with both parties increasing their share of the vote by 3% since April’s survey.
More specifically, SYRIZA has a 22% edge over New Democracy, compared to 19% in April, and New Democracy ranks second with 20.5% (17.5% in April). The far-right Golden Dawn is estimated to win 10% of the votes compared to 9.5% in the previous poll, while To Potami has fallen to 7% from 9.5% in April.
The socialist coalition Elia lost ground by 0.5% and polled 6.5% in May, while the Democratic Left (DIMAR) rose to 3% from 2%. Both the Communist Party of Greece (KKE) and the Independent Greeks (ANEL) remain steady at 6% and 4% respectively.
Asked who would win, 44% of the participants said SYRIZA, while 36% went for New Democracy. However, according to the poll, the current Greek Prime Minister and New Democracy leader Antonis Samaras seems more suitable for the top job, polling 32% compared to 24% for SYRIZA’s leader Alexis Tsipras.