Shop Staff and Police Clash in Athens Over Sunday Opening 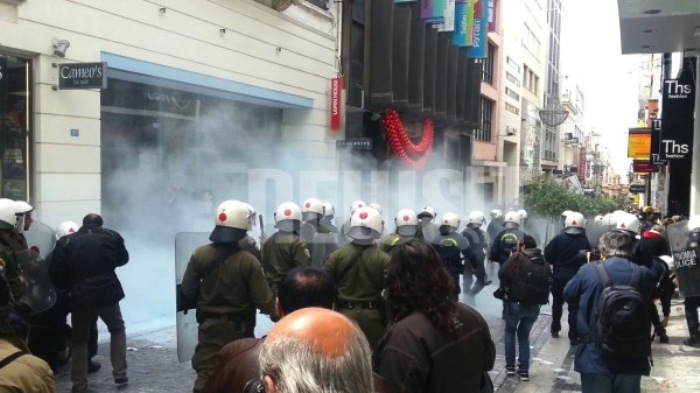 Clashes occurred in Athens today when police tried to evict a gathering of shop workers protesting Sunday opening hours.
One protesters was injured in the incident, which occured on Ermou, a pedestrian street where protesters with banners gathered outside stores.
Some 300 retail employees participated in the riots. Unconfirmed social media reports stated that as many as 1,000 participated. During the tension, balls were thrown at shop windows and banners reading “Never on Sunday” were unfurled on Ermou St., in the northeast of the capital, shattering them.
According to complaints from shoppers, unidentified groups verbally attacked window-shoppers and even pushed some people out of shops, causing many shops to close for the day.
Secretary-general of the Federation of the Greece ‘s Private Employees, Thanos Vasilopoulos, said many of the workers protesting had not been paid, some for as long as 15 months, while claiming Sunday opening does not increase a shops’ income but promotes “medieval” working conditions.