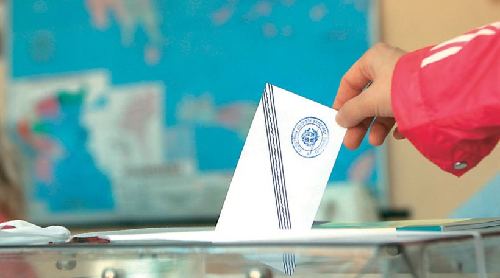 A Rass opinion poll concerning the upcoming European Parliament elections carried out on behalf of the newspaper “Parapolitika” shows New Democracy in the lead for the European elections.
In particular, New Democracy has a narrow lead of 0.2 percent for the upcoming European Parliament election. New Democracy is first with 21.4 percent while the major opposition party, SYRIZA, is second with 21.2 percent. The newly-founded political party, To Potami stands in third with 10.3 percent. The Greece ‘s  neo-Nazi party, Golden Dawn, comes fourth with 6.1 percent followed by the Greek Communist Party (KKE) at 5.2 percent. The opinion poll places the Olive Tree (PASOK) in sixth with 4.0 percent, followed by Independent Greek party with 3.1 percent. Democratic left stands at 2 percent.
However, the percentage of those who have not yet decided what they are going to vote, reaches 20.1 percent, surely a percentage that can change the balance.
The respondents of the poll were also asked which party they would vote for if the national parliamentary elections were to take place. SYRIZA came first with 29 percent, followed by New Democracy at 27.5 percent. Third is Golden Dawn with 10 percent and fourth is KKE with 7 percent along with To Potami also standing at 7 percent. PASOK stands fifth with 6 percent and in sixth is ANEL with 4 percent. DIMAR stands at 3.5 percent.
On the issue of who would be most suitable for the position of prime minister, coalition leader and current Greek Prime Minister Antonis Samaras received 44 percent of votes from those who participated in the poll, followed by SYRIZA chief Alexis Tsipras with 26 percent.