Women of the 1821 Greek Revolution 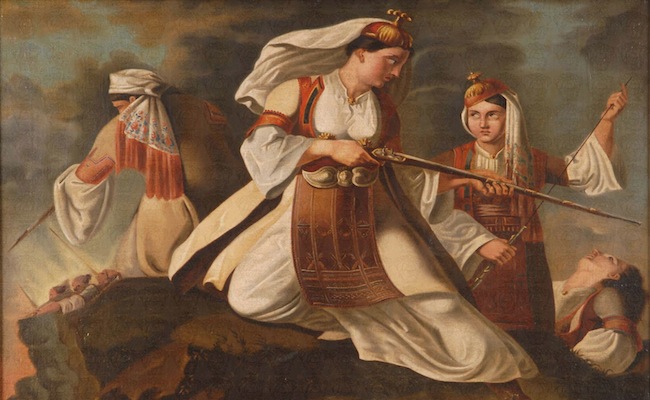 The participation of women in the Greek Revolution was not always as mere moral support for the men in the bloody business of fighting Turks. Some ladies got their hands just as dirty in the struggle for freedom, and also paid the ultimate price.
Women who stood out during the Greek Revolution of 1821 unofficially imposed gender equality on the battlefield. Their uncompromising courage and remarkable bravery; their adventures and sacrifice show their dynamism and patriotism that still inspire us to move forward and overcome the recent crisis.
“Souliotisses”
The women of Souli in northern Greece used to take part in all military operations, where their role was, at first, reserved and auxiliary. However, when needed, women would throw rocks from cliffs and even charge into battle, swords in hand. And when their honour was at stake, they were prepared to pay the ultimate price.
At the “Dance of Zalogo” of December 1803, rather than live with miserable dishonor as Turkish captives, the Souli women threw themselves off the same cliffs from which they had once thrown stones, standing out in history for their defiant martyrdom.
“Mesolongitisses”
The ladyfolk of Missolonghi also showed remarkable courage. The “free besieged” women who, throughout the long siege of western Greece, helped defend the area in any way possible, transporting materials for forts and caring for the sick and injured. Women in Missolonghi inspired soldiers and motivated them to fight to the end. These women had endured the same horrible fate as the men during the exodus and even though many were able to return to the city, some committed suicide and others were massacred or captured.
Laskarina Bouboulina
She was a heroine of the Greek Revolution who didn’t fit the stereotypes her time. She was raised at sea and expressed a love for ships and travel early on in life. She was born fatherless and she was widowed twice. Her two marriages left her a large fortune which she managed successfully and with great ingenuity. According to unconfirmed oral testimonies, in 1819 she was initiated into the Society of Friends (Filiki Eteria), in Istanbul. Her biggest loss was the death of her first-born son (from her first marriage), Yannos Giannouzis in late April 1821, during a gunfight with the Turks near the city of Argos. However, her patriotism overcame all her other emotions. Laskarina Bouboulina was killed in 1825 as the result of a family feud in Spetses, at the balcony of her house. Her killer was never identified.
Manto Mavrogenous
Manto was born in Trieste to Nicholaos Mavrogenis, a member of the Society of Friends. His daughter also joined in 1820. Besides her fortitude and great fortune, she was also highly educated, with excellent command of French, Italian and Turkish and exercised no little influence on European public opinion. Manto spent her entire fortune sponsoring the Greek struggle for freedom, taking part in many operations herself. By the end of the revolution she had settled in Nafplio and she was honored by Kapodistrias for her services. After the assassination of Kapodistrias she was forced to return to Mykonos, where she died of typhoid fever.