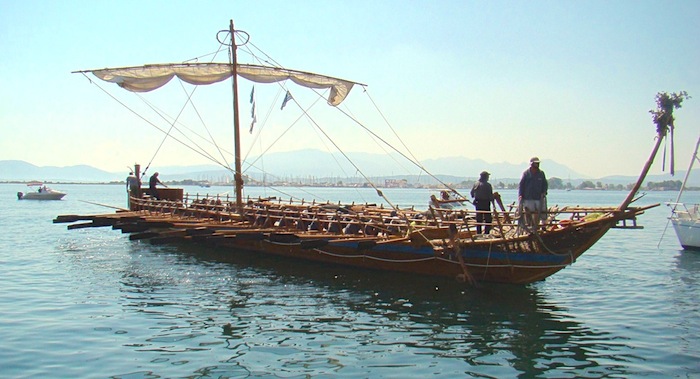 A museum in the port city of Volos in eastern Greece will host the replica of Argo, the legendary ship propelled by 50 oars-men and sail on which according to Greek mythology, Jason and the Argonauts sailed from Iolcos to the Black Sea to retrieve the Golden Fleece.
The city of Volos is hosting a competition for projects on the ”Creation of a museum to value the ship of Argo.” The application deadline for those wishing to take part in the competition expired at the beginning of the month.  The 68 projects sent from architects in Greece and Italy as well as other countries, will be evaluated next spring and then construction work will begin.
Currently, the replica of the ship – inaugurated in 2007 and entirely built with traditional methods and materials used at the time like oak, beech, pine, ash and fir wood (for the mast and oars) – is still at the port of Volos, in the gulf of Pagassitikos, for students and tourists who want to go on board and discover the story of its mythical trips.
”But Argo, which is owned by Volos, doesn’t just aim to be an attraction for tourists,” said Deputy Mayor Fotis Lambrinidis, who is in charge of technical services at the municipality of Volos. ”This ship represents for us an element of culture, a real symbol of our city. The objective of the competition we called as a first concrete step for the creation of a museum to valorise Argo, is to gather proposals for the creation of a thematic museum to turn the contemporary Argo into a monument, presenting its history through myth and historical elements connected to it,” concluded Lambrinidis.
(source: ANSA)