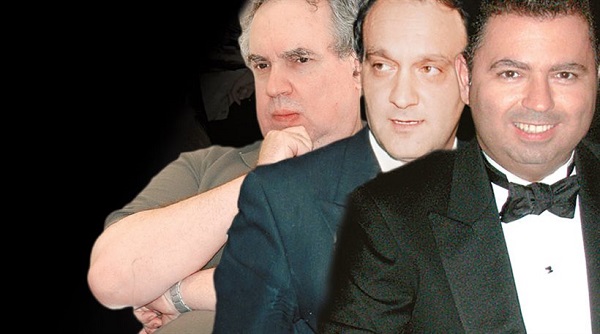 The psychiatric ward of the Greek Korydallos prison in Athens is not exactly the ideal place for business meetings of media owners. However, this depressing environment holds three of the once most powerful Greek media magnates, Lavrentis Lavrentiadis, Michalis Androulidakis and Kostas Giannikos.
This trio could be a reference point for today’s gluttonous capitalistic dreams, as all of them came out of nowhere and created media empires. The common fate of the three men depicted a frenetic race from obscurity to affirmation and unimaginable wealth. Now, the same fate unites them behind bars and reveals three fallen “media kings,” who have physically and mentally collapsed, just like their empires.
Lavrentis Lavrentiadis lies in his cell worn out by the chronic rheumatoid arthritis he suffers from and is unable to attend to even his most basic needs. The person involved in the Proton Bank scandal is charged with money laundering, fraud, embezzlement of €700 million and involvement in a criminal organization. Through a network of many companies, Lavrentiadis became owner of over 30 companies, including chemical and fertilizer’ plants, banks, media and real-estate companies, while also holding shares in the Olympiakos football team in Greece.
Michalis Androulidakis began his career as an agricultural correspondent, bearing the nickname “gardener,” but rose to power by selling his wife’s apartment and launching a financial newspaper modeled on international financial papers. The success of the newspaper called “Ependitis” led to more newspapers and magazines being launched, some of them even containing lottery coupons for winning apartments in Athens. At the beginning of the new millennium, Androulidakis decided to add a T.V. channel to his portfolio, stating to his financial advisers that with a market capitalization of 1.5 trillion drachmas, they could spend around 1 billion drachmas per month until his channel TEMPO would become profitable. By being too ambitious and quite the megalomaniac, Androulidakis destroyed his whole empire with a move that secured him a bed in prison, where he works in the accounts department, trying to reduce his sentence, while showing symptoms of mental disorder.
The last media king, Kostas Giannikos, apart from the T.V. channel ALTER, owned an entire system of mass culture: publishing houses, CD and DVD production companies, record labels, radio stations and theaters. In 2011, when ALTER was shut, the debt of the channel was around €500 million. As CEO and major shareholder of the station, Giannikos, with nothing to too proud of in terms of how he handled its funds, was also sent to the psychiatric ward for a €1.2 million debt to the Greek state.