A strong quake with magnitude 5.7 shook the Greek island Cephalonia a few minutes ago. The shocks were also felt in Athens and as far away as Karditsa and Larissa. The epicenter is located in the western part of the island.
People report the shaking also from distant countries, like Albania, Montenegro, Bulgaria and Southern Italy. 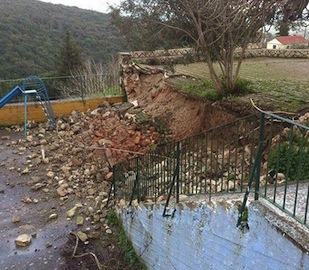 The magnitude was revised to 5.8. A shallow depth of only 17 km is given by greek authorities. Quakes with this magnitude and shallow depth happening in populated locations can cause heavy damage, esspecially to buildings with poor construction.
So far, 2 aftershocks with M 4.1 and 4.2 were registered. More are expected to follow. People on Cephalonia should be prepared for it.
Police official in Athens said eight homes and a few farm houses were reported damaged so far but there were no injuries. Greece’s interior minister was heading to Cephalonia by helicopter to assess the situation.
“The tremor sent people into the streets and squares; it was quite strong,” the police official on the island said.
“It is too early to say if this is the main earthquake, although it likely is,” Manolis Skordilis, an associate professor of geophysics at the University of Thessaloniki, told The Associated Press.
“This area shows the highest incidence of seismic phenomena, not only in Greece, but on an east-west axis stretching from Gibraltar to China. In 1983, there was a 7 magnitude quake in the same area … We have already had many aftershocks and expect many more.”
Costas Papazahos, a seismology professor at the same university, said the 5.8 was a preliminary reading, adding that he expects the final figure to be between 6 and 6.2
Such earthquakes are not rare in Greece. Cephalonia and the nearby island of Zakynthos were devastated by a 7.2-strong quake in 1953.
[youtube]ljuOpBHIn3g#t[/youtube]
[youtube]Ot1Z_RMD51I[/youtube]