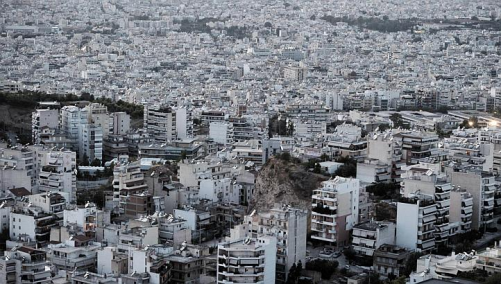 During the conference of the Hellenic Property Federation (POMIDA) which was held on Saturday in Athens, the president of the Federation Stratos Paradias, underlined in his remarks the urgent need to change the legislative framework on the new property tax, before hundreds of property owners, sellers and even notaries default on their payments and land in prison.
A poll conducted by Greek company Kapa Research and presented during the conference, revealed a general deterioration in the lease market and the difficulty of property owners to meet their tax obligations. The new property tax (ENFIA) which was passed last month by the parliament in Greece as part of the imposed austerity measures is described by 73 percent of citizens as unfair.
According to the poll, in a single year the property taxes were doubled, corresponding to 43.3 percent of the total income, as opposed to 22 percent in 2012. One in two owners admit not getting any income from their property, but only paying taxes, while 38 percent of the population does not have sufficient income to meet their upcoming obligations.
Approximately one in ten owners have settled their property tax payments for the years 2011, 2012 and 2013, which were collected ex post facto last year by the Ministry of Finance. Four in ten owners in Greece would cede their properties to the state if they had the opportunity, so as to cover any current or future tax obligations.
The vast majority (65 percent) considers the decision to exclude rural properties from the ENFIA, while taxing the urban ownership more, as wrongful. An even larger percentage (80 percent) considers it unjust that uninhibited properties which don’t bring in any profits, don’t enjoy any tax deductions in the ENFIA.
The president of POMIDA emphasized that urban property owners who were asked alone in 2013 to pay five different property taxes, in 2014, have to pay for the new “single” property tax which in effect is double the taxes, while the actual market values are much lower than the objective values, according to which the property taxes are and will be until 2016, calculated.