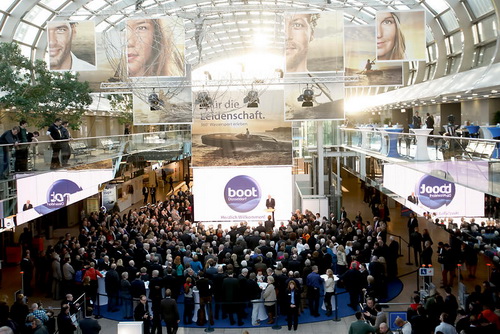 The world’s largest and most famous international trade fair for boats and marine tourism is held this year in Düsseldorf, Germany, running till January 26. As part of the activities surrounding the main exhibition, the Greek consulate in Düsseldorf organized an event for the presentation and promotion of marine tourism in Greece.

The Greek event held at Boot Düsseldorf 2014, as the fair is commonly known, was supported both by the organizing authority of the fair, Messe Düsseldorf and the German Marine Federation. The event was aimed towards yachting agencies, specialized marine magazines and marine specialists, while providing an opportunity for Greek exhibitors, including the Greek Marinas Association and the administrative regions of the Peloponnese and South Aegean among others, to showcase their products and services to the German market and to promote the advantages of Greece.

“The main goals of these trade fairs are to acquire business contacts. In this context, we welcome this event and hope that it will become a regular feature,” said the director of Boot Düsseldorf, Goetz-Ulf Jungmichel. The president of the German Marine Federation Jürgen Tracht noted, “Greece is by nature perfect for marine tourism.” The consul general of Greece to Düsseldorf, Grigorios Delavekouras said that the imminent changes in the field of marine tourism will create a simpler, friendlier and more modern institutional framework for yachting in Greece.

Boot Düsseldorf every year draws in more than 200,000 visitors and professionals and over 1,500 exhibitors from more than 60 countries. The many thematic areas include sailing and boat chartering, as well as other forms of marine tourism such as diving and other water sports.

It was on this day, February 26, one year ago that the first case of coronavirus was confirmed and officially announced in Greece.
Cyprus