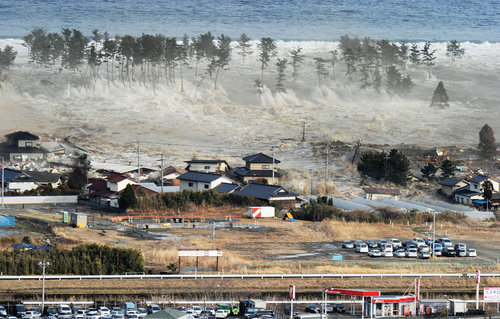 Japan may have experienced major disasters from tsunamis, but the creation of a new integrated tsunami intensity scale came from Greece.
According to an article in “Eleftherotypia” a research team from the Laboratory of Tectonics and Geological Mapping of the University of Athens, headed by Professor of Dynamic Tectonic and Applied Geology and President of Greek Geological Society Mr. Efthymios Lekkas, created a new tsunami intensity scale which will help scientists to assess the intensity and the impact of tsunamis and will be a valuable tool against future disasters.
The scale was published in the “Bulletin of the Seismological Society of America,” a prestigious scientific journal.
As Mr. Lekkas stated: “We created it first, before the Japanese. Before our scale, there were some older ones, but they weren’t complete and were based on very old scientific data. They had a 3-grade scale based on a tsunami of 1927, with no further means and tools to assess it.”
Researchers explained that they had the idea of creating a 12-grade scale when they were studying the Japanese tsunami. “We classified the criteria into groups so that we can assess the tsunami. The first category has to do with its physical characteristics such as the wave’s height and its distance from the beach. The second concerns tsunami impact on humans, the third is the impact on the environment and the fourth is the impact on coastal infrastructure (ports). The fifth category is the impact on mobile objects (boats, cars) and the sixth is the impact on structures (houses, stores),” researchers stated.
“The new scale is compatible with older ones and has a reliable horizontal correspondence throughout the groups of criteria. It is easily and directly applicable to all environments and particularly useful for the outlining of microzones of different intensities in any tsunami affected area,” they continued.
“The creation of this scale is very important and useful since it is expected to help not only scientists but also insurance companies to properly calculate damage costs from tsunamis based on their size and intensity,” Mr. Lekkas concluded.