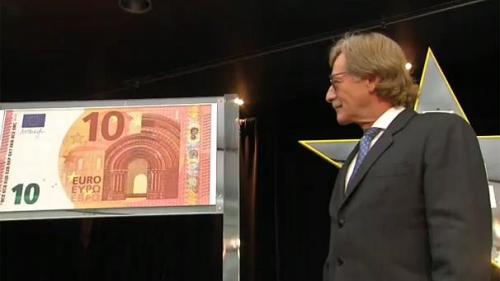 Today was the unveiling of the new 10€ banknote that will start circulating later this year. As the ECB stated earlier today, the new banknote will be easily recognizable given the fact that it resembles the previous 10€ note of the first series. The ECB started circulating the Europa series in March, 2013, when it first introduced the 5€ banknote to the market. The Europa series banknotes are being circulated gradually over the years.

The new designs include enhancements on banknote technology so that forgery could be close to impossible. Moreover, the new series of banknotes are designed to be more durable in time and use. Like the new 5€ banknote, the new 10€ banknote includes a portrait of Europa – a figure from Greek mythology and the origin of the continent’s name – in the hologram and the watermark.

Mr. Yves Mersch, member of the executive board of the ECB, when introducing the new banknote, stated: “Today is also a chance to highlight the importance of maintaining people’s trust in the euro. One of the main reasons for introducing a new series of notes is to ensure that everyone who uses them can continue to do so with complete confidence. That’s why we have drawn on a number of new technologies to modernize the security features, making the notes even more resistant to counterfeiting.”

He continued: “In addition, the new banknotes have an innovative coating that makes them more durable than the first series. The five euro and ten euro notes are not always treated kindly. By protecting them better, we can prolong their service life and reduce their environmental impact.”

He also mentioned: “The new ten is the second note in the Europa series and follows the new five, which started circulating in May last year. As I’m sure you’ll agree, the note you’re going to see is instantly recognizable as a ten. It certainly resembles the ten euro notes you have in your pockets, with its distinctive Romanesque architecture. However, perhaps it will have more of a visual impact, as the images are larger and more defined, the colors are stronger and the bridge has added depth.”