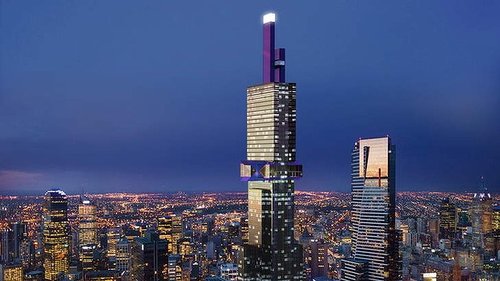 According to the Australian press, Katsalidis and his wealthy investors sold their stakes in the under construction skyscraper in Melbourne, which was to have 108 floors, standing at 388 meters in height.

Reports state that Katsalidis gave up his ambitious project because despite initial approval by the authorities, the buildings’ height had to be reduced as it would pose as a danger to flights.

Katsalidis said however: “As far as I’m concerned the project is going ahead and we’re still the architects.” The new plans for the project are expected to be released in 2014.

His company, Fender Katsalidis Architects, which since 1996, operates jointly with Karl Fender in Southbank, Victoria, has won many awards. The numerous awards they have accumulated since 1997, can be attributed to their architectural performance on projects throughout Australia and Southeast Asia.

A few months back, Nonda Katsalidis was honored yet again, by the Royal Australian Institute of Architects (RAIA), who presented him with the national architectural award Sir Zelman Cowen Award for designing the famous Museum of Old and New Art (MONA) located in Hobart, which is the largest private museum for art and antiquities in Australia. He designed it in collaboration with the wealthy and eccentric museum owner and art collector David Walsh. The museum has already attracted 600,000 visitors in 2012 and has won the Tasmanian Tourism Award.

Katsalidis’ tallest standing building until now, is the impressive Eureka skyscraper, a tourist attraction in Melbourne. It boasts 91 floors, a height of 297 meters and is located in Southbank, central Melbourne.