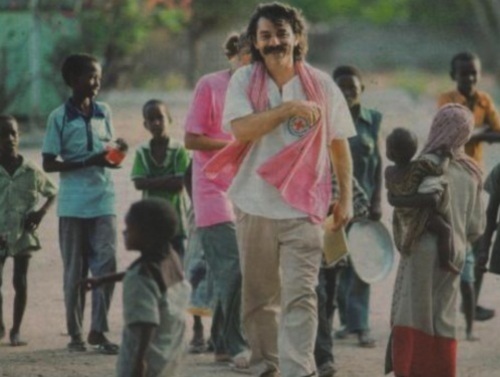 Greek doctor, Chris Giannou has experienced many wars and civil conflicts and has traveled in many deserts, mountains and inhospitable areas risking his life. His only tool is his faith in his work. Giannou is currently one of the few doctors throughout the world who deals with extreme conditions.
His parents had immigrated from Florina, Greece to Canada where he was born. He studied medicine in various cities of the world and then joined the International Red Cross.
According to the Greek media, he is one of the few surgeons whose knowledge is recorded in the medical textbooks of the Red Cross as a guide for the future generations of surgeons. He has served in Nicaragua, Zimbabwe, Yemen, Afghanistan, in the Palestinian camps, Nepal, Somalia, Haiti and Cambodia.
“I love people. Today I think that I am able to teach young people and transfer my knowledge. Unfortunately,  war isn’t ending and there are victims. It is very different to work without medical tools and technology. Of course I’m afraid. Everyone is afraid, but you need to have self-control” he says. “The wounds of war are very different from those caused by accidents. The pathology is not the same. You have to work with minimum tools and without hygiene.” he continues.
The retired doctor is currently collaborating with the Medical School of Athens in a program concerning the management of disasters. During the last years he is one of the twelve permanent residents of the castle of Monemvasia.