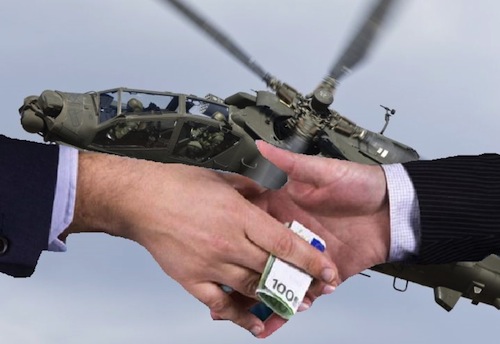 Switzerland has blocked CHF10 million ($11 million) of suspected bribery funds held in Swiss banks and opened investigations into three alleged accomplices of a Greek money laundering scandal.
The Federal Prosecutor’s Office (FPO) confirmed the action at the weekend following newspaper allegations of former Greek defense ministry workers taking bribes from German companies supplying military equipment to Greece in the 1990s.
Swiss banks have been used to harbour millions of dollars of bungs, according to the Tages Anzeiger newspaper.

A former Greek defense minister has already been jailed in Greece after being found guilty of corruption. The Greek authorities have now extended their investigation to other officials suspected of taking bribes for placing orders with defense contractors.

Speaking to Swiss national television, anti-corruption campaigner Mark Pieth said dirty cash was still washing through the Swiss financial center despite efforts to clean up Switzerland’s image.
“We still have a relatively high amount of such money in Switzerland,” he said.