Heritage Daily: Greek Neolithic Site One of 10 Most Important Antiquity Discoveries of 2013 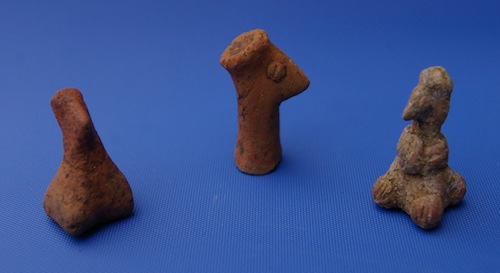 A Neolithic site in central Greece was named as one of ten most important archaeological discoveries of 2013, on a list compiled by web-based magazine Heritage Daily that specialises in cultural news from the world and all historical periods.
The excavation of a low hill with archaeological remains – known as “magoula” by Greek excavators – to the west of Volos in Fthiotida, prefecture is being dug by a team of the Greek Archaeological Service headed by Nina Kyparissi and Southampton University professor Yannis Hamilakis, with the collaboration of the British School of Archaeology.
Over 300 clay figurines 3 to 12 cm long have been found, depicting humans and bird-like beings that are dated to the Middle Neolithic period, from about 5800 BC to 5300 BC.
“One can find figurines at other Neolithic sites in Anatolia and the Balkans,” Hamilakis explains, “but both the number and variety of the types make ‘Koutroulou Magoula’ stand out. Their interpretation is open and intriguing.”
What makes the findings more unusual is the fact they were found in excavations rather than on the surface of the earth, as is often the case in fields dug up by plowing, while most of the figurines depicting human forms do not indicate sex. “These figurines could open new paths in the interpretation of similar objects, because they were many in number and varied and also because they come from a systematic excavation rather than from surface collection,” Hamilakis says.
The figurines were spread over the roughly 4 hectares of the magoula’s site, which also yielded stone foundations of houses, a tumulus tomb from the Bronze Age, and even a young woman’s burial from historical times, the 12th century AD.
Findings suggest that the inhabitants of the Neolithic settlement were farmers, raised animals, made tools from flint and obsidian, were in touch with other settlements in their area and had a sense of community, which can be seen from the scale of the projects that have left traces today.
(source: ana-mpa)