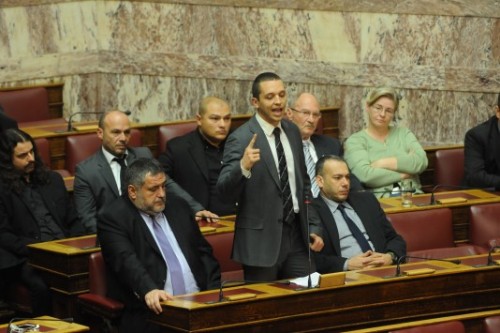 The Greek parliament has voted in favour of halting State funding for Golden Dawn. All political parties were in support, apart from Golden Dawn of course.
This decision has caused reaction among the Greek Neo-Nazi party’s MPs. In particular, Panagiotis Iliopoulos stated that this is a political attack on his party and that it is based on testimonies of “hooded witnesses.” Another MP, Polivios Zisimopoulos claimed that “leftist terrorism,” is targeting Golden Dawn.
The Greek Minister of the Interior, Yiannis Michelakis noted that “for the government it is inconceivable that the Greek state and taxpayers should be asked to subsidize a party which is linked with violence and criminal activity, and who also try to cover their true nature under the cloak of democracy.”
He continued, “when we have evidence for illegal activities which go against the principles of the state, its institutions and public order, we have a duty to halt funding for such organisations, which participate in or even orchestrate such alleged crimes, or we will end up giving financial support to criminals.”
Mr. Michelakis also added that “the way Golden Dawn acts, the fact that it is organised along military lines, along with many testimonies of witnesses which point to the criminal nature of the organization, leaves no room for doubt. We must immediately stop subsidizing Golden Dawn. This is the least we can do to protect our country and our democratic institutions.”