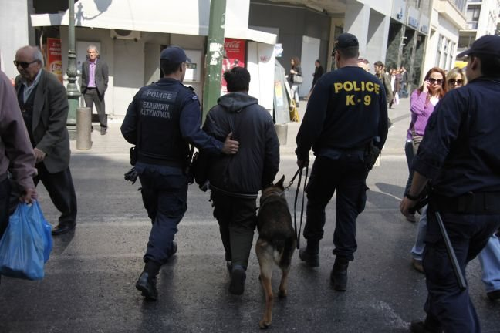 The Hellenic Police have uncovered a gang of smugglers. Two men were arrested on suspicion of being members of the gang, a 52 year-old Greek and a 45 year-old Iraqi, along with a 21 year-old Greek woman. The police are still searching for two other suspects believed to be accomplices.
The arrests followed a joint operation over the week-end between the Immigration Office of Thessaloniki, and border guards of the Police Department of Orestiada. The three suspects were arrested as they attempted to board a public bus in the company of two illegal immigrants who were being escorted from Orestiada to Thessaloniki.
At the same time, police carried out a search of a basement apartment in the area of Agios Dimitrios in Thessaloniki, where 22 Syrians were apprehended. According to information received by the police, this group was due to be sent to countries in Central Europe.
The apartment had been rented by an Iraqi man and was being used as a staging post for immigrants on their journey to Central Europe, as well as a hiding place.
During searches carried out at the homes of the suspected gang members, an amount of 4,300 euros was seized, along with two laptop computers, transaction documents from a money transfer company totaling 8,823 euros, winning OPAP lottery tickets of a total value of 13,860 euros and bus tickets.
Those arrested will be brought before the Prosecutor in Thessaloniki, while the search for the other two gang members continues.