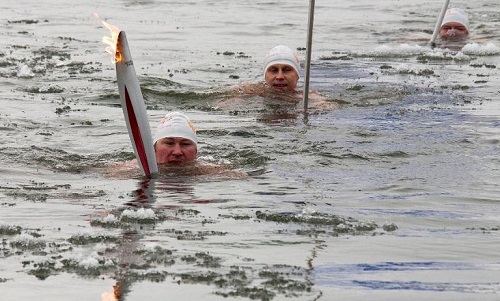 Early this morning the Sochi-2014 Olympic Torch was plunged to the bottom of Lake Baikal, which is the deepest lake in the world. The lake curves for nearly 400 miles through south-eastern Siberia, north of the Mongolian boarder. The Olympic Torch was transferred to the middle of the lake with a special craft.

The first torchbearer on the boat, handed over the Olympic Flame to divers. Then the second took the lit torch below Lake Baikal, where his dive culminated with a “Flame Kiss” at a depth of 13 meters. The torch was equipped with a special burner, which was designed and developed in a similar way to flares used for warning signals at sea. The temperature of the water in Lake Baikal was 3 degrees Celsius.

The flame’s next “strange” destination is the top of Mount Elbrus, which is the highest peak in Europe and is located in Russia’s North Caucasus.