Erdogan Now Calls for "One Cyprus" 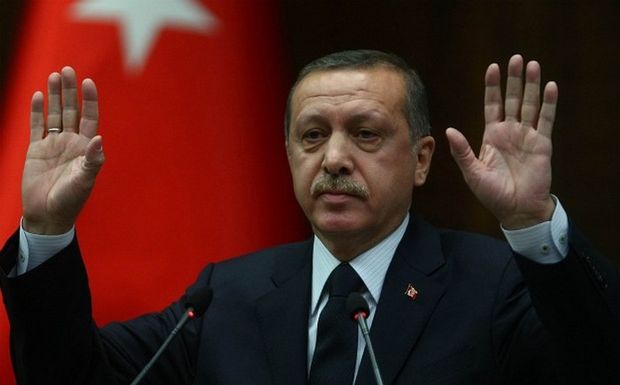 Turkish Prime Minister Recep Tayyip Erdogan, who earlier raised a lot of hackles when he said, “There is no country called Cyprus,” now says there is – and that it has to be one, unifying Cypriots with Turks who have occupied the norther third of the island since an unlawful invasion in 1974.
Erdogan has called for the involvement of Cyprus’s three guarantor powers – Greece, Turkey and the United Kingdom – in negotiations for a peace settlement, adding that the aim of all sides must be to create “one Cyprus,” he said.
“[We] must take part in this effort and solve this longstanding problem,” Erdogan was quoted as saying after a meeting with UN Secretary-General Ban Ki-moon in St Petersburg, where he was on a bilateral visit. He said representatives must not leave the negotiating room “until a solution is found.” He didn’t offer any solutions himself, however.
The Turkish premier also urged the Greek-Cypriot administration to give up its demand for a joint statement from the two sides of the divided island ahead of a meeting between Cyprus President Nicos Anastasiades and Turkish-Cypriot leader Dervis Eroglu on Nov. 25 as the two try to re-start talks that have stalled for more than a year and as Eroglu continues to play hard ball and is offering no concessions.
“In order to solve the problem, we need to approach it with honesty and put aside any preconditions,” Erdogan was quoted as saying without elaborating on what he meant.
Cypriot officials were not impressed with what he had to say. Government spokesman Christos Stylianides said the issue of adopting a joint communique “is not simply a matter of procedure, but of substance.”