Fernando Santos: "We Determine Our Luck" 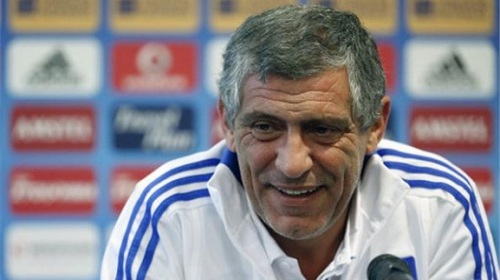 Fernando Santos, manager of the Greek national team, without any hesitation said that “Greece is the favorite to progress,” at the press conference he gave earlier today before the second leg match between Romania and Greece. He added that “Greek internationals have the necessary realism and experience in order to protect Friday’s win and come out winners from the second leg match.”
Greece won Romania 3-1 in the first leg match last Friday in Karaiskakis Stadium. Tomorrow at 21.00 in Bucharest, is the kick off of the decisive second leg match between the two teams.  Greece is 90’minutes away from progressing to the final stage of the 2014 World Cup, while Romania has a last chance to turn the things around and grab an unexpected victory.
The Portuguese Manager of Greece’s national team did not hide behind his finger as he underlined that all men in the team are realistic in understanding that Greece’s side has what it takes to come out winners from tomorrow’s clash and defend the first leg’s result. “We are definitely realistic in understanding that we have an advantage over Romania to progress in the next round after the first leg’s victory.  With my player’s experience we should be able to secure the result we want after winning the first game by a two goal margin. It would not be an easy game, as the Romanian national team will do its utmost to turn the situation around, but we determine the game’s fortune.”
Santos said also that Katsouranis’ absence will not have a negative impact in the team’s performance, as Greece’s side has a large depth and enough quality replacements.
Fernando Santos was also asked whether he will adopt a more defensive approach in the forthcoming match in order to defend the first leg’s result and he answered: “We have a two goal margin and surely we must keep that in mind. But if we go to this match trying only to avoid conceding any goals, the result will be bad for us. We must be balanced on both sides of the pitch and try to score one goal that will bring us one step closer to the final stage of the 2014 world cup.” He also mentioned that he puts faith in his team’s ability to secure the wishing result in order to qualify from the knock out round.“A potential success over Romania” he added “will belong to all Greeks, not only to me or the players.”