Troika: Ireland is Ready to Exit the Bailout 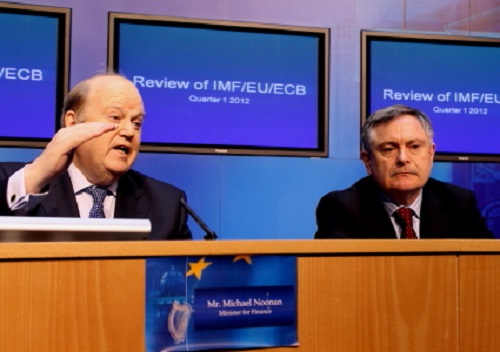 Today Troika completed its final review of the economic situation of Ireland. According to Troika, Ireland is now ready to exit its bailout program; it is the first European country to achieve this.

According to the official report from the European Commission, the European Central Bank and the International Monetary Fund, the country has been “steadfast” in the application of the needed imposed measures. Although, Troika warned that if Ireland was to meet its declared targets it would need to make cuts in healthcare service and welfare budgets.

International aid for Ireland came in 2010 in order to protect its financial sector from collapse. Ireland was obliged to take some austerity measures and make some structural changes in order to take a loan of 67.5 billion Euros.

Ireland’s Prime Minister Enda Kenny said that “today is historic in the sense that we have come through a very difficult period.” According to sources, it was expected that the Irish government would announce in December, that the country is exiting the bailout program and it will rely solely on the markets for funding. Ireland is now experiencing a “nascent economic recovery.”

The economic recovery will be helped by the exports, the growing retail trade, property prices, and of course by the renewed consumer confidence.

According to the official report of Troika, “declining unemployment and improving business surveys suggest that the job creation seen in the first half of this year is continuing, which is a crucial element for a revival of domestic demand.” The situation of Ireland gives hope to Greeks who have suffered a lot from the imposed measures of Troika.

Government spokesman and Deputy Minister to the Prime Minister Christos Tarantilis resigned his post on Sunday in a letter to Kyriakos Mitsotakis.
Diaspora

Successful Greek-Americans from all across the West Coast are being featured in a new YouTube series titled "Learn From the Greeks".
Crime