Greek Prime Minister Samaras: "Greece Is Not at War" 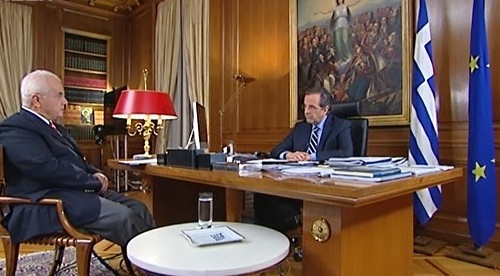 Greece is not at “war” with the European Union and International Monetary Fund and we are also not at the verge of a civil war, Prime Minister Antonis Samaras said during a televised interview broadcasted by Mega TV.

The interview took place on the eve of the latest review by the lenders to decide whether to pay the next tranche of bailout loans. The Troika of the European Union-International Monetary Fund-European Central Bank (EU-IMF-ECB) said the government is facing a budget hole of up to 2.5 billion euros ($3.37 billion) but the government insists it’s only a fifth of that, some 500 million euros, ($674.25 million) and that it can be filled by social security cuts, breaking his promise not to impose more austerity.
Inspectors from the “troika”, resume a visit to Athens on Tuesday to check how far the country has come in meeting its bailout commitments.
“First of all let me say something – let’s do away with this notion that we are in some kind of war,” Greek PM Samaras told Mega TV. “It is a negotiation.”
Samaras also said that the government will take no additional horizontal austerity measures, noting that “such measures have not been agreed, and the Greek society and economy cannot afford any more measures.”
On Violence
Speaking on the assassination of two Golden Dawn members and escalating violence in Greece Samaras stressed that he would “not allow democracy to bow to criminal violence.”
“There must be stability and unity and trust by Greeks in their country and trust by foreigners in Greece.”
“For God’s sake, we are not on the verge of civil war, we Greeks are united against violence,” the Greek premier pointed out, underlining that what some people were doing at the moment was “throwing a match into the powder keg at a time when we have so many ‘fires’, social, economic, etc.
Samaras did not avoid to attack the main opposition Radical Left Coalition (SYRIZA).
“Violence is always violence and should be condemned; the political parties should denounce violent acts and extreme behaviors that lead to violence. It is unacceptable (for SYRIZA) to call on the people to overthrow the government.”
Speaking on Golden Dawn and how the polls still show the party to increase its influence he noted that the voters are not Nazis: “There are no Nazi roots in Greece, it is just a reaction to the hard times the people are going through. As soon as unemployment will start being reduced… such phenomena will disappear.”
The Greek Prime Minister also said that his government was not late in dealing with the ultra-right Golden Dawn (Chryssi Avghi) party. He said that the preparation work had been done and for the first time the Greek state acted instantly and in an organized way.
Greece & Technology
He also spoke during the interview about initiatives that his government will implement in order to help Greek startups and announced that in 2104 Greece will have free nationwide Wi-Fi for all!

The Greek Orthodox Church is blessed with rich, colorful and symbolic Easter traditions that Greeks have followed for centuries.
Greece