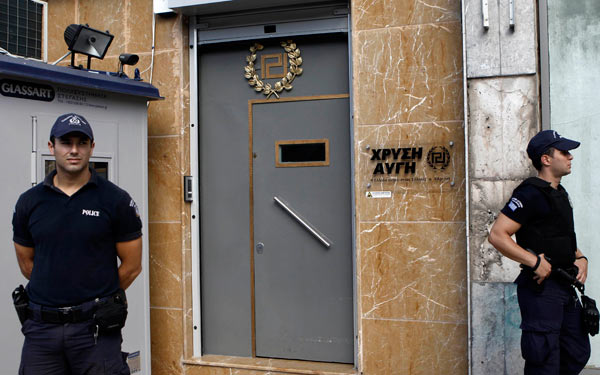 Greek police said that two people were killed in a shooting at the Neo Iraklion office of the neo-Nazi Golden Dawn party in Athens on Nov. 1.
Georgios Fountoulis 26, and Manolis Kapelonis 23, were shot dead when two people on a motorcycle sprayed fire at the Dolden Dawn office. Alexandros Gerontas who was also shot is at the hospital in critical condition.
The shooting comes a month after an anti-fascist hip-hop artist, Pavlos Fyssas, was killed by a man police said is linked to Golden Dawn but there was no information on whether the attack was related.
The shooting came hours after Justice Minister Haralambos Athanassiou submitted to the General Accounting Office an anti-racism bill that foresees tough penalties for racially-motivated crimes, legislation aimed squarely at Golden Dawn. Prime Minister Antonis Samaras had set it aside earlier in the year, not wanting to make martyrs of the party.
The bill, which is a combination of various proposals submitted to Parliament by different parties in recent months, is to be finalized and submitted to the House for approval in due course. It foresees jail sentences of up to three years and financial penalties of up to 20,000 euros for incitement to racist attacks.
Similar penalties are foreseen for those who praise Nazism, the Holocaust and other internationally-recognized genocides which are criminalized by the bill.