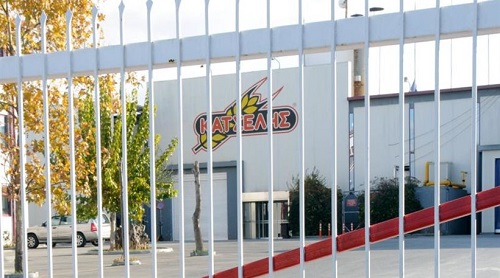 Nutriart (KATSELIS) declared bankruptcy yesterday. The next step is to find a liquidator.
The bankruptcy petition was filed in June 2013 and was tried in early autumn, the decision was quickly made. The main reasons for which one of the largest companies in the Greek food industry came to an impasse, were the economic crisis, the shrinking market and share loss, a lack of liquidity and bad business decisions.
The families David and Leventis, major shareholders of the company, which used to be one of the strongest ”players” in the market, were led to this decision and not the solution of the clearing operation, having previously sought the support of banks, which ultimately never came. As a result the company didn’t have the funds to operate smoothly. The banks gave limited funding to the company, while the major shareholders funded the group, but that was not enough to get out of the impasse. As a solution to the impasse the administration sought any interested buyers for individual assets, but without result.
The company’s management proceeded to cut back the company’s production, which had negative consequences, since the stores were not supplied with the company’s products resulting in a loss in sales.
It should be noted that the company’s turnover was consistently reduced in the last three years, ie 79.25 million in 2010, 38.32 million in 2011, while in 2012 was just 20.23 million Euros, a decrease of 47% compared to 2011. The operation of the company continues to be problematic and extremely damaging, displaying an average monthly operating deficit of around 1.2 million.