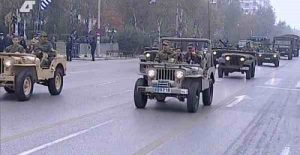 The military parade in Thessaloniki for the celebration of the National “Oxi” Day, the 28th of October, took place in a foggy climate-actual and political-and in the presence of the President of the Republic Karolos Papoulias.
Today’s parade was marked by the empty seats in the official’s platform. Besides the Minister of National Defense Dimitris Avramopoulos, who represented the government, Evangelos Venizelos, the representatives of SYRIZA, KKE and DIMAR were also absent.
Evangelos Venizelos is thought to be absent in protest against the statements of the Regional Governor of Central Macedonia Apostolos Tzitzikostas, concerning the invitation to Golden Dawn. It is also considered that another reason for his absence, is his dispute with the Minister of National Defense on his decision for the marching of the military vehicles, aircrafts and helicopters in the streets of Thessaloniki.
The representatives of the opposition parties were absent in protest against the decision of Apostolos Tzitzikostas to invite MPs of Golden dawn to the parade. We should also note that the representatives of Golden Dawn were also absent from the officials’ platform.
The Mayor of Thessaloniki Yiannis Boutaris was present sitting next to Apostolos Tzitzikostas, despite the intense dispute they had the previous days.
At the same time the citizens weren’t allowed to access in the area of the parade. Due to the increased security measures they saw the parade from a distance, while many just preferred to stroll the Thessaloniki seafront or in the center of the town. 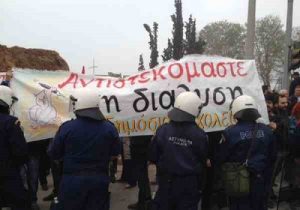 Tension occurred when protesters who were gathered close to the parade area, among them were members of SYRIZA, as well as teachers and school guards, who started shouting slogans against the governmental policy.
The police prevented them from moving any closer. However, the crowd of the protesters caused a small panic when they moved from the White Tower, where they had gathered initially, and then were mixed in the crowd.

Karolos Papoulias: Greece has given everything it could give
The President of the Republic Karolos Papoulias sent a stern message to the European partners, after the completion of the military parade in Thessaloniki.
In his statements on the occasion of the celebration of the 28th of October, National Day, the President of the Hellenic Republic sent a clear message to Europe, that the Greek people cannot give anything more than what they have already given.