Who said that Greece is only famous for ouzo, raki and good wine? Greek beers may not be as popular as in other European countries, but there are some serious efforts worth mentioning, and even more worth tasting!
Though most Greek beers are not widely known, there are some, like Volkan Beer from Santorini island that have been awarded internationally. So if you’re the type who enjoys an ice-cold brewsky while watching the game with buddies, or loves sitting by the fireplace with friends nibbling on a Greek “meze,” search for these quenchers… 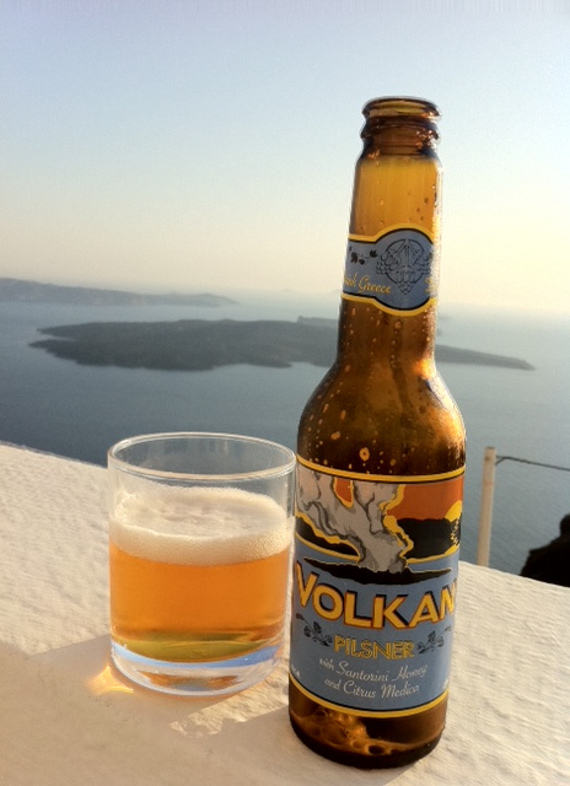 Volkan Beer
Produced with the famous honey of Santorini and the citron of Naxos island, Volkan Beer won the “New Section Product Innovation of the Year” award at the International Beer Awards 2013 that took place in Prague on May 14th.
Famous Greek artist Alekos Fasianos designed the Volkan beer bottle, and a large percentage of its proceeds go toward the program Greece Debt Free- a program helping to reduce the national Greek debt.

Mythos
This beauty survived among other  famous brands of Greek beer simply due to its taste.  It also helped to have many successful campaigns with the motto “myth is everywhere” backing it up… A Blonde Lager produced by Mythos Brewery became a favorite among the Greeks!

FIX
The “vintage” of Greek beers! It is the first Greek beer and everyone in Greece knew the brand even if they had never tasted it. In 2010 FIX reentered active in the Greek market, giving the past generation an opportunity to enjoy it again, and the younger a chance to discover it!

NHSOS
New, Cycladic and physics! This beer is not subjected to heat treatment, and is produced without preservatives. Produced in Tinos island NHSOS has been in the market for a year.

Kaiser
The truth is, even Greeks didn’t think of it as a Greek beer, yet Kaiser has been made by Mythos Brewery in Greece since 1976.  This beer’s got true German standards, except made with Greek materials.  Need we say more?

Septem
The idea was born on June 2009 somewhere in Evia. The name is of latin origins and means seven-a number which symbolizes creation. If you want a Septem beer you have the following three options: Pilsner, Pale Ale and Honey Golden Ale.

Alfa
A Blonde Lager, which is characterized by light flavor. It has 5% alcohol and is distinguished by its aroma. Produced by Athenian Brewery.

Pils Hellas
A blonde beer, which is produced by Athenian Brewery. A Blonde Lager, with 5% alcohol and special aroma. The idea for this beer came when the son of a Bavarian brewery wanted to make a Greek beer with German standards.

Bios 5
It is the world’s first beer, and as indicated by the ingredients- produced with five grains. A Quality Lager that came about in 2011 in the production by the Athenian Brewery.

B29
An organic beer with a strange, sweet story… B29 was created by a brewer to celebrate the birth of his child. Of the barrels created, the one with number “29” had something special that remains a mystery to this day.

NEDA
Started production in 2009, in the region of Messinia. The name was borrowed from the only female river of Messinia, Neda. According to Greek mythology Neda was the goddess of water.

Vergina
Has its own particular tradition. Indeed, the choice of Rodopi was not random. Rumors say that there was a place, where the first form of Greek beer in antiquity was produced!

Marathon
An exclusive exportable Lager.  It may not be widespread in America, but in Greece, this beer definitely has loyal fans!

Peiraiki
An organic beer, fermented and aged.  In about six weeks you can enjoy it either in Pils or Pale Ale version. Produced since 2005 from Piraeus Microbrewery.

Rethimnian
Blonde or Black? Produced in Rethymno, Crete island, this is an organic beer you can find primarily in Crete.

Corfu Beer
Royal Ionian, Real Ale Bitter, Ionian Epos and Real Ale Special are your options. The name comes from Corfu island, where it is produced.  Unfortunately you can only find it on the Ionian island.  Good excuse to make Corfu your next destination!

Magnus Magister
Produced by the brewing of Rhodes, Magnus beer or Knights beer, and its name refers to the Grand Master of the Knights era and indicates the highest office thereof. These beers arrive in many islands of the Aegean and the Ionian Sea.

Blue island
Contains 4, 5% alcohol, prepared from traditional barley malt, yeast and aromatic hops. Stands out for its flavor and served with a lemon in the neck of the bottle, like all light beers of its category.