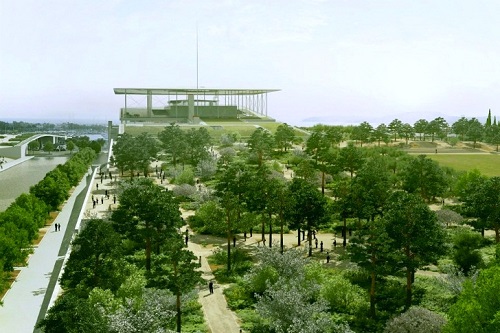 In what is the biggest private venture in Greece, the Stavros Niarchos Foundation Foundation is planning to build a “Central Park” in Athens to surround its cultural center, a 566 million euros ($768.46 million) project that government officials said would give an important business and psychological boost during a crushing economic crisis.
It is expected to take two years to complete and will bring much-needed greenery to the concrete cityscape of the city. The center is being designed by famed architect Renzo Piano.
The visitors center opened on Oct. 7. It was designed by two young architecture students, Agis-Panagiotis Mourelatos and Spiridon Giotakis. Its purpose is to give the citizens the opportunity to find out about SNFCC and learn more about its role.
Through the Visitors Center you can see the SNFCC construction site up close and learn about the intensive work for its construction. There are also guided tours in order to see construction underway.
The center will be constructed in Kallithea, a neighborhood three kilometers (1.86 miles) south of Athens’ center. It is a multi-functional and environmentally viable project, where the culture and the arts are together.
It will use the natural resources in order to reduce its carbon footprint. The park is designed to ameliorate the level of life in the Greek capital due to its recyclable structure. The site will house the National Library of Greece and the Greek National Opera in a 170,000-square meter landscaped park.

You can get there:
By Bus: Get off at the Onasseio stop along Sygrou Avenue.
From Palaion Faliro: use the underground pass at the Planitarium to cross to the opposite site and then make your way to the pedestrian bridge.
By tram: Get off at the Delta Falirou stop and through the Esplanade you will reach your destination.