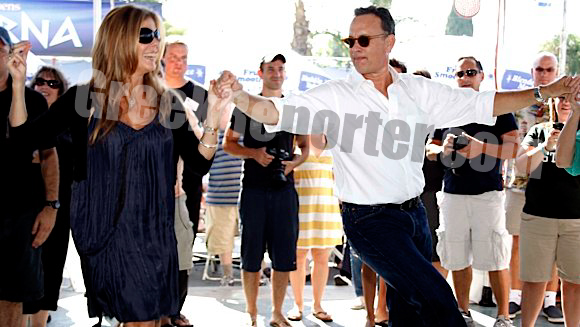 The Fifteenth Annual LA Greek Fest will take over the heart of the Byzantine-Latino Quarter on the grounds of Saint Sophia Cathedral located at 1324 South Normandie Ave. in Los Angeles, California.

Plus, this year, the LA Greek Fest has teamed with local Los Angeles brewer Angel City Brewery to pair their award-winning and signature craft beer with the Greek homemade dishes to make for an epic culinary weekend.

With the historic and world-famous Saint Sophia Cathedral as the backdrop, guests will enter the historic grounds off Pico and Normandie where they will be able to feast on small plates of traditional and homemade Greek dishes, enjoy Greek wines and signature spirits, craft beer presented by Angel City Brewery, tours of the historic Saint Sophia Cathedral, Greek folk dancing, live music by Greek band Omega and local Latin artist Charinga Latina blending the Greek and Latin fusion like nowhere else in LA.
The LA Greek Fest is a non-profit organization and proceeds benefit Saint Sophia Cathedral. Admission for the epic culinary weekend is $5 each day and a la carte items start at $3. Admission tickets are available on-line and at the door.

The LA Greek Fest helps to support the Cathedral and its new Community Center – The Huffington Center. The Huffington Center is a 53,000 square facility that boasts a 400 person banquet hall, The Maniatakos Fellowship Hall and the Wilson-Hanks Family Cultural Center, a state-of-the-art gymnasium and performing arts theatre. The LA Greek Fest not only brings together over 13,000 attendees over the three-day weekend, but it also brings it’s share of Greek American celebrities year after year, including Tom Hanks and Rita Wilson who have been honorary co-chairs and MC’s for the last several years, My Big Fat Greek Wedding’s Nia Vardalos and her husband Ian Gomez, several Greek singers and platinum artists over the years including Anna Vissi, Sakis Rouvas and most recently Thanos Petrelis in 2012.